An Overview of Automotive Vehicle and Component Regulations in China

The process of obtaining CCC certification process for automobiles and automotive components is similar to that applicable to other products that require CCC certification. A product sample is selected from the factory by a nationally-accredited auditor and is evaluated by a testing laboratory authorized by China’s Certification and Accreditation Administration (CNCA). Manufacturers based outside of China can save time by forwarding samples for type testing in advance. Initial factory inspections are also conducted to evaluate the quality control system of the factory as well as product consistence.

Once type testing and the initial factory inspection has been satisfactorily completed, the certification body (CQC or CCAP) issues the CCC certificate. Once a manufacturer has obtained CCC certification, it can apply the CCC mark to their product, either by printing or silk screening the CCC logo on the product label or by purchasing CCC stickers to attach to their product.

Follow-up factory inspections are required to maintain the validity of the CCC certificate. The scope and content of follow-up inspection is similar to the initial inspection. Manufacturer need to prepare an annual verification test report as evidence of product consistency, based on verification testing conducted according to GB standards by the manufacturer or by an independent testing laboratory. Radom sample tests may also be conducted on site. The follow up inspection frequency is usually once a year, but the inspection frequency may be reduced if a factory has routinely demonstrated compliance during past inspections.

Main Changes to CCC Regulations in 2015

In August 2014, the CNCA announced 15 new regulations applicable to automotive CCC products, which came into effect on January 1, 2015. Some new products were added to existing CCC categories, the scope of some categories were extended and some GB standards were updated to incorporate new requirements. The changes include:

Children’s safety seats: Children’s safety seats must now be tested to the requirements of GB27887 which is adopted from ECE R44 with national deviations. Similar types of children’s seats utilizing the same construction and materials and intended for use by children within the same weight group can be grouped together as a family of products for the purposes of CCC certification.

Rear view cameras and monitoring devices: These products have now been added into the indirect vision devices category. The test standard is GB15084 (refer to ECE R46). Cameras, monitoring systems and recorders used to indirectly view zones in close proximity to the exterior of a vehicle can now apply for CCC certification.

Passenger car tires: The standard for passenger car tires has been updated to GB 9743-2015, replacing GB 9743-2007. Truck tires are now subject to the requirements of GB 9744-2015, replacing to replace GB 9744-2007. The effective date of these changes is February 1, 2016, and manufacturers will need to update the CCC certificate and test report to verify compliance with the new standards.

Vehicles aimed to sale on China market must be listed on the website of China’s Ministry of Industry and Information Technology, or MIIT (www.miit.gov.cn). This listing is mandatory for all vehicles as well as components, and is in addition to CCC certification. In addition, the listing requirement applies to other automotive products and components that fall outside of current CCC certification categories. These products and components include engines, wiper motors, heater motors, flash relay motors, front light cleaners, batteries on electrical vehicles, electrical motor and controllers and conductive charging connector sets for electric vehicles.

To comply with this requirement, manufacturers must submit an application for listing with MIIT-authorized agencies. The agencies will request test reports from the applicant for review. If the report demonstrates compliance with all applicable requirements, it will then be listed in the MIIT system. A separate factory inspection is not a requirement for listing an automotive product on the MIIT website.

Manufacturers of automotive components that have already received CCC certification can simply reformat their CCC test report to comply with the Bulletin Register Report format as part of their MIIT listing application. Uncertified components need to be tested at authorized testing laboratories in China.

Samples can be prepared by the manufacturer for test conditions. As an example, testing requirements for electrical motors and controllers include performance testing and environmental testing. This testing requires the motor to run at a certain speed and torque to produce a torque-speed map curve. So it’s recommended that motor and controller manufacturers provide a CAN bus or a programmed controller with shielded cables to perform the test. Two sets of motor and controller samples are recommended to facilitate conduct testing in parallel and to avoid the risk of potential testing failures.

So-called “new energy” cars are still not common in China but there number is growing significantly. A number of electrical companies are considering the production of electric vehicles (EVs), and the government is also encouraging consumers and government departments to purchase new energy cars through tax incentives and by the broader development of EV charging stations and facilities.

Currently, entire EVs can be CCC certified. But some key components are outside of existing CCC categories. The CQC has issued some voluntary certification regulations for batteries, chargers and charging stations. The MIIT has also issued a list of tests required for new EVs and EV components, as noted in Table 1. 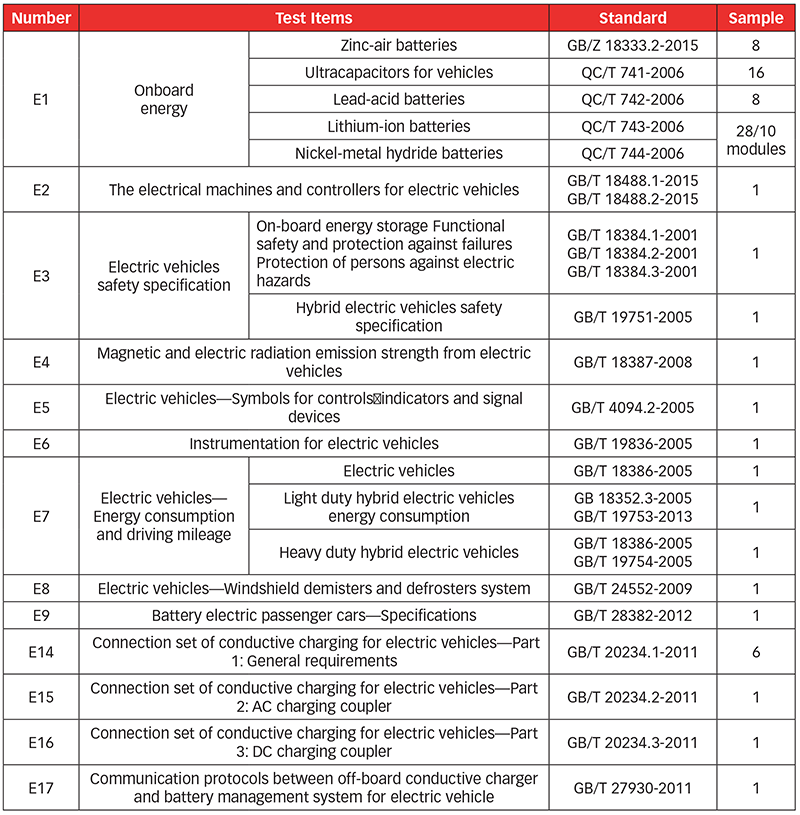 Manufacturers should prepare for these regulations accordingly. With the development of the new energy vehicle industry, certain components may also require CCC certification in the near future.

Paul Wang is the technical director for G&M Compliance, focusing primarily on China certifications including CCC, SRRC, NAL, CFDA and China RoHS. He can be reached at paulwang@gmcompliance.com.