A Sunny Day in Tennessee: The New Volkswagen Plant at Chattanooga

The lack of conversation around the environment, climate change, and our energy economy during the 2012 election season, while widely noted, still seemed to attract little attention. Certainly health, financial and national security issues were more immediate concern for many voters. Yet, the lack of initiative at the federal level has not kept technical innovators, astute business people and local governments from moving forward with new ideas for addressing our environmental and energy concerns.
On these fronts, there are plenty of encouraging news items that don’t necessarily make the headlines or feature familiar political faces. These are the less glamorous corporate press releases, web article links and third-page news stories most of us only stumble upon. One such example of environmental innovation being put into practice with too little fanfare was the inauguration, two days after the President’s own this past January, of the Volkswagen Assembly Plant in Chattanooga, Tennessee (Picture 1). 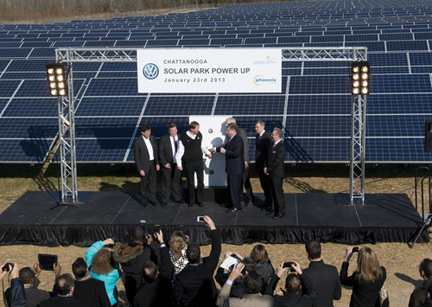 The plant is nestled on 1,400 acres between the Appalachians and the Mississippi Embankment near the boarders of Georgia and Alabama. Currently employing over 3,200 and growing, it is the first and only LEED Platinum Certified auto plant in the world today. Plant components include a body shop, paint shop, assembly line, technical center, training academy, and supplier park (expected to include eight suppliers and indirectly employ another 9,500 people). Bringing both

good jobs and increased tax revenue, the plant is a welcome boost to the regional economy. But even more exciting is the wide-ranging environmental sensitivity exercised by business leaders and local government in engineering this great example of combining economic growth with sound environmental solutions.

Beginning in the paint shop, an advanced painting process has been implemented which eliminates one step of the painting procedure, thus reducing CO2 emissions by 20% while also bringing down cost and energy use. Furthermore, in this improved painting system, a new Eco Dry Scrubber System avoids the consumption of 20,000 gallons of water each day.

Also in the interest of water conservation is the use of collected rainwater for cooling and in the restrooms, saving up to 350,000 gallons per month. Meanwhile, the use of low-nitrogen oxide gas burners in the plant’s boilers reduce nitrogen oxide emissions into the atmosphere, and heat exchangers capture and recycle heat from the building.

Other features incorporated into the design of the building itself are six-inch mineral rock wool insulation panels that reduce building energy consumption by 35 percent, a T5 lighting system that reduces energy consumption by 20 percent (over conventional lighting), and a specially designed white roof that reduces the heat island effect of the plant by reflecting the heat from the sun. The entire site is being operated under certified environmental management systems (ISO 14001 and ISO 50001).

Around the building, LED street lighting saves about 100,000 kilowatt hours per year and greatly reduces light pollution at night. During construction, two creeks on the site were restored to enhance the wildlife habitat and provide a wildlife corridor around the site, while wetlands and habitats of native vegetation have been identified and protected. Even the impact of shipping finished product has been considered, as 85% of vehicles are sent to dealers via rail to reduce diesel emissions and road traffic.

But possibly the most ambitious and high-profile aspect of the Chattanooga plant’s environmental commitment is a 66 acre solar park, the largest in the state of Tennessee (Picture 2). The park was designed and installed by Phoenix Solar Inc., the US subsidiary of Phoenix Solar AG headquartered in San Ramon, CA. Phoenix Solar is an industry leader in designing, building and operating large commercial and utility-scale solar power plants. The park is owned and managed by the Silicon Ranch Corporation, a Nashville-based developer and operator of solar facilities whose other projects include a 1.4 megawatt solar energy campus in Pulaski, Tennessee, a rooftop installation for Second Harvest in Nashville, Memphis Bioworks, and Simon Solar Farm in southeast Tennessee. 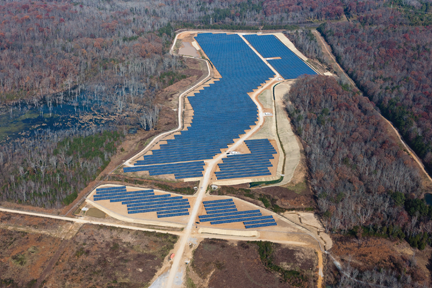 The fixed-angle array system at Chattanooga is made up of 33,600 solar panels having a generating capacity of slightly more that 9.5 megawatts. The 3 x 6 poly-crystalline silicon modules (model JAP6-72-285) were made in China and Mexico for the JA Solar Company. Each panel is rated at 285 watts. The field is designed as 10 inverters of 3,360 panels each. The panels of each inverter are arranged in 168 strings with 20 modules per string (Picture 3). The inverters are connected to 5 transformers, which convert the 9.58 megawatts of DC power generated by the field to 7.6 megawatts of AC power at the plant substation. The Volkswagon plant consumes 100% of the power generated by the park for car manufacturing. This covers 12.5% of the plant’s need during peak production times. During non-production times (weekends), the solar park is able to provide 100% of the plant’s power needs. 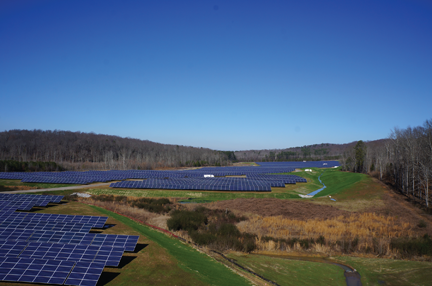 If the growing use of large-scale solar power plants in Tennessee is an indication, and we hope it is, the field of renewable energy is ready for a growth spurt. This is great news for all of us as citizens, as well as a great opportunity for electrical engineering in general and compliance engineering in particular. As more of the general population becomes aware of our joined opportunities for immediately accessible alternative energy, the engineering community will need to step forward with solutions for generating more efficient, low-cost options in delivering that energy. The ability to respond to this need will offer both individuals and companies a chance for industry leadership. 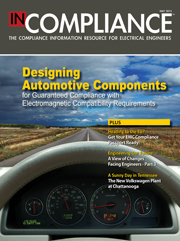