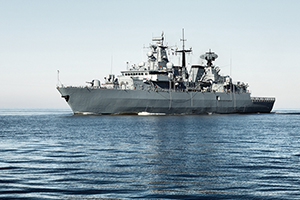 Ten years ago, MIL-STD-461F added a low frequency extension to CS114 that models common mode noise generated by dc power systems used on Navy ships. An electromechanical generator sources a high voltage dc potential, with lower levels of dc power derived from the original high potential bus by solid-state dc-to-dc conversions. Such power conversion results in large amounts of common mode noise. The extension is a level of 77 dBuA from 4 kHz to 1 MHz. To support the new requirement, Figure CS114-2 was augmented to control injection clamp insertion loss below 10 kHz. But the extension was overly stringent and, more importantly, the concept behind the extension is not the optimal way to run the test at audio frequencies. The optimal method uses a few watts of power from an audio source instead of 100 watts of power from a 50 ohm source, the latter not being typical test equipment.

The purpose of the maximum insertion loss curve as stated in the corresponding MIL-STD-461 appendix is the desire to limit the required clamp power to 100 watts, a common maximum power rating for such equipment. But a limit performing that function below 10 kHz is a log-linear extension of the limit from 10 – 100 kHz, not the different slope as in the present Figure CS114-2. Figure 1 reproduces Figure CS114-2 showing the present limit with a dashed red overlay of the suggested one. 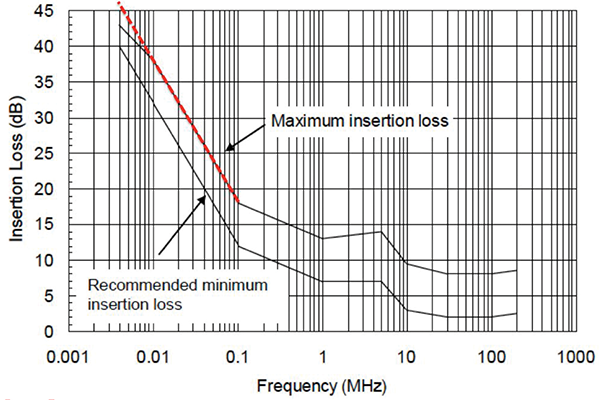 Figure CS114-2 insertion loss limits above 10 kHz bracket the performance of the Eaton (later Tegam and now ETS-Lindgren) Model 95236-1 below about 6 MHz, and the Model 95242-1 above that frequency. These were the injection clamps available in the 1980s when bulk cable injection techniques evolved. The roll-off below 100 kHz is 20 dB per decade, reflecting magnetizing inductance as the factor causing the roll-off. That slope doesn’t magically change at 10 kHz and any deviation in the slope of the maximum allowable insertion loss is problematical in designing compliant clamps. The following simple analysis shows the deviation from 20 dB per decade is not necessary.

We calculate the maximum allowable insertion loss that will allow a 100 watt amplifier to induce 77 dBuA in the calibration fixture, assuming all 50 ohm equipment (classic CS114 approach).

at either end of the calibration fixture when they are terminated in 50 ohms (34 dB ohm).

The difference between the 4 dBm dissipated in each 50 ohm load on the calibration fixture and the 100 watts (50 dBm) available from the amplifier is by definition the maximum allowable insertion loss.
That value:

It is uncommon to see 50 ohm power amplifiers at audio frequencies. It is much more common to see audio amplifiers with output stages configured to drive very low load resistances, anywhere from 2 – 8 ohms for traditional audio amplifiers. Amplifiers designed to drive 2 – 8 ohms have output impedance a fraction of the load impedance; that fraction is called the damping factor, and will be a factor of ten or even higher in a good quality amplifier.

Before describing the test set-up and measurement, it is useful to look at why low impedance audio equipment will work much better than 50 ohm equipment below 10 kHz. It comes down to the impedance presented by the injection clamp at these low frequencies, as noted earlier reflecting the magnetizing inductance. One could measure that inductance, but it isn’t necessary. The insertion loss of any clamp meeting Figure CS114-2 means that the impedance of the clamp at 10 kHz is on the order of 1 ohm. Hence the tremendous loading (insertion loss ~ 35 dB at 10 kHz) in a 50 ohm system, but it should be immediately apparent that an audio system with an output impedance on the order of 1 ohm will be much more efficient in getting power into the clamp and into the calibration fixture 50 ohm loads.

A final note before delving into test set-up and results. Some might be concerned that replacing 50 ohm equipment with much lower impedance equipment will alter the coupling efficiency into circuits other than the calibration fixture, causing poor repeatability. But that is not the case. The very low impedance of the magnetizing inductance shunts the 50 ohm equipment, resulting in very low inserted impedance regardless of the impedance of the driving circuitry.1

In this investigation, a Solar Electronics Model 6552-1 100 watt audio amplifier designed specifically to provide 2.4 ohm output impedance was used. Coupled to a Model 95236-1 clamp through a Solar Model 6220-1 2:1 step-down transformer (CS01/101 applicability), it converts the output impedance to 0.6 ohms, as desirable for MIL-STD-461 requirement CS01/101.

As a first step, the classic 50 ohm system insertion loss of the clamp is shown in Figure 2a. The second step was to insert a pair of step-down transformers in series to reduce the HP 4195A network analyzer 50 ohm source impedance to 0.5 ohm and measure the insertion loss with the lower output impedance. Those results are shown in Figure 2b. Comparison of 50 ohm and 0.5 ohm insertion loss results shows lower insertion loss, requiring much less power to achieve the target 77 dBuA current in the calibration fixture. 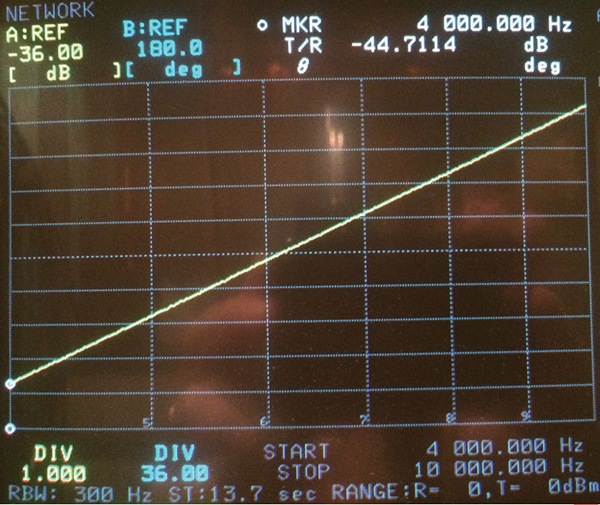 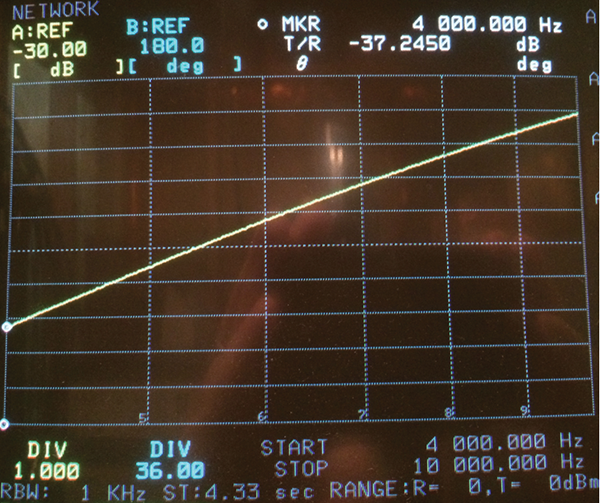 The set-up for measuring insertion loss and actual power measurements, less the network analyzer signal source and fixture-induced potential receiver, are shown in Figures 3a and 3b.

Figure 3a: Measurement of 95236-1 injection clamp insertion loss from 4 – 10 kHz using the Solar Model 7033-1 50 ohm : 2.4 ohm and Model 6220-1 2 ohm to 0.5 ohm step-down transformers. The classic 50 ohm insertion loss measurement is identical to above except removing the two step-down transformers. Coax with yellow strain relief entering image from bottom is the HP 4195A source output, and the coax leaving the calibration fixture at upper left goes to the HP 4195A test port. 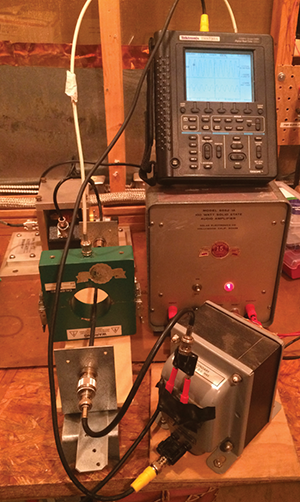 In Figure 3a, the 50 ohm output of the HP 4195A is the coax cable with yellow strain relief at the bottom of the figure. The transformer to which it connects is the primary side of a Solar Model 7033-1, which steps a 50 ohm impedance down to 2.4 ohms. The secondary side of the Model 7033-1 step-down transformer connects to the primary side of a Solar Model 6220-1 step-down transformer, which converts a 2 ohm primary to a 0.5 ohm secondary, and that drives the Model 95236-1 directly.

Figure 4 shows the potential measured using a 50 ohm receiver (HP 4195A) to monitor the potential on one side of the calibration fixture. A nominal 111 dBuV value is the limit current of 77 dBuA flowing through a 50 ohm (34 dB ohm) load. 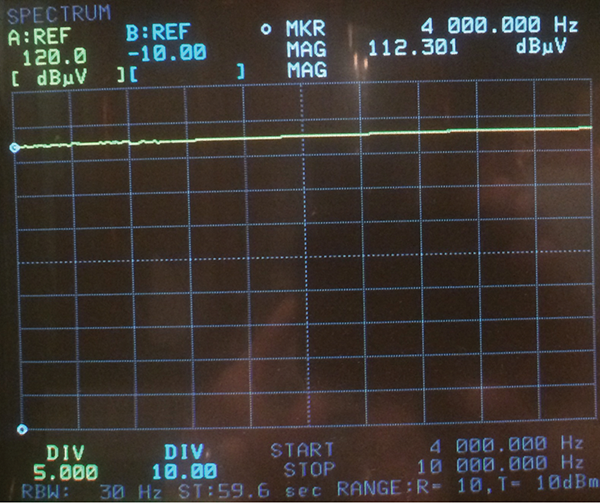 Figure 5a is an oscilloscope reading of coupling transformer output potential (top trace) and current (lower trace) into the Model 95236-1 injection clamp when the Figure 4 potential is induced in the calibration fixture. Figure 5b is a measure of the phase shift between applied potential and resultant current, for the purpose of calculating actual power dissipation in the clamp, as compared to apparent power. (Phase shift between applied potential and resultant current when clamp was replaced by a 50 ohm load was zero using the Pearson Model 3525 current probe shown in the test set-up photos.) 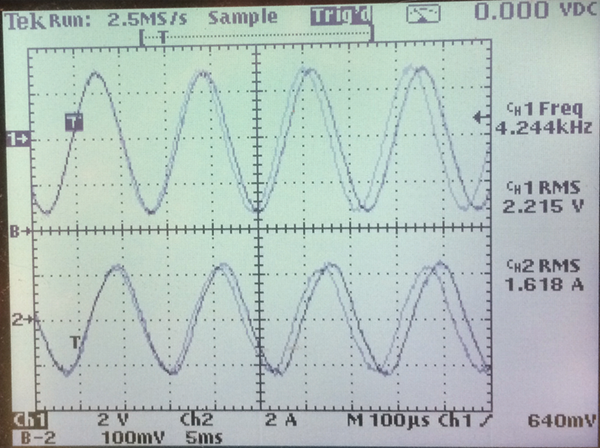 Figure 5a: Upper trace is applied potential out of coupling transformer and lower trace is current into the 95236-1 injection clamp when inducing 77 dBuA in the calibration fixture. 3.5 W apparent power is applied to injection clamp. Actual power dissipated in clamp is 3.3 W, based on 23° phase difference. 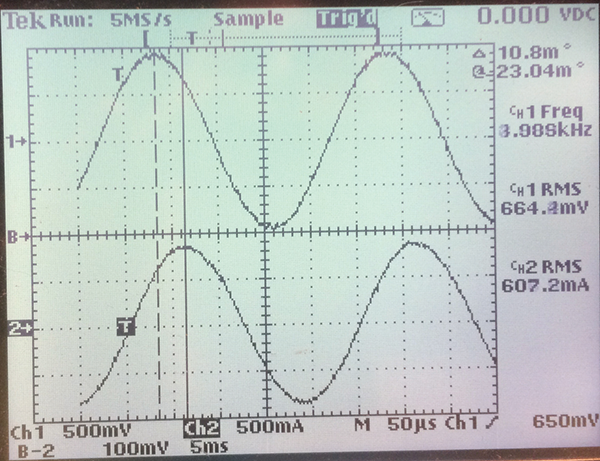 Figure CS114-2 ought to be modified so that the maximum insertion loss limit looks like the red-line in Figure 1. This will reduce the probability of an overzealous auditor rejecting perfectly good test equipment, or a purchase decision being based on an overly stringent specification.

Second, using the same amplifier and coupling transformer as for CS101 driving the injection clamp below 10 kHz allows the specification limit to be induced using just a few watts of power, instead of pushing the limits of the clamp’s power handling capacity, and burning up most of 100 watts between the amplifier and the calibration fixture loads.

The author wishes to thank the engineers who took the time to review drafts of this article in advance of publication. Any errors of commission or omission are solely the responsibility of the author.

Ken Javor has worked in the EMC industry for over 30 years. He is a consultant to government and industry, runs a pre-compliance EMI testing facility, and curates the Museum of EMC Antiquities, a collection of radios and instruments that were important in the development of the discipline, as well as a library of important documentation. Javor is an industry representative to the Tri-Service Working Groups that maintain MIL-STD-464 and MIL-STD-461. He has published numerous papers and is the author of a handbook on EMI requirements and test methods. Javor can be reached at ken.javor@emccompliance.com. 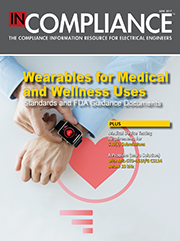