A Dash of Maxwell’s: A Maxwell’s Equations Primer – Part 2: Why Things Radiate

In Chapter I, I introduced Maxwell’s Equations for the static case, that is, where charges in free space are fixed, and only direct current flows in conductors. In this chapter, I’ll make the modifications to Maxwell’s Equations necessary to encompass the “dynamic” case, that is where magnetic and electric fields are changing. Then I will try to explain why things radiate.

Here are Maxwell’s equations for the static case: 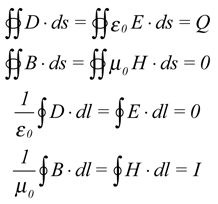 The first of the modifications we need to explain the “dynamic” case we owe to the work of Michael Faraday. For the static case, the third equation states that the electric field integrated around a closed loop (the “line integral”) is zero.

Engineers more commonly deal with this in the form of Kirchhoff’s voltage law:

Faraday’s contribution was to establish that Kirchhoff’s voltage law is nearly always wrong. Where there is a changing magnetic flux through a loop, a voltage is created by that changing flux. That voltage is equal to:

Where A equals the area of the loop.

Figure 1: Kirchhoff’s voltage law is illustrated in (a). The voltage around a closed loop is zero. In (b), a changing magnetic flux introduces an additional time varying voltage across the resistor.

The effect of this flux-induced voltage is illustrated in Figure 1(b). It shows up as an additional time varying voltage across the resistive load. So to account for changing magnetic fields through the loop, we must modify Maxwell’s third equation as follows:

This equation explains those ever-present and annoying “ground loops.” They can be minimized by minimizing either the strength of the magnetic field (B=µ0H), its rate of change (∂B/∂t) or the area of the loop (A). The equation assumes that the loop is two dimensional and the field uniform across the loop at any given instant. Where neither is so, we need a more generalized solution:

This equation is known as the “integral form” of Maxwell’s third equation, but it’s cumbersome to use, and, for the most part, we’ll be dealing with two dimensional loops and fields that at any given instant are uniform over the loop area, so we can work with the simpler form.

It was Maxwell himself who completed what was to become the fourth of his equations for the dynamic case. The fourth equation for the static case states:

The problem lay with the definition of current, I . Today, engineers are comfortable with thinking of current traveling through circuits either by way of conduction, by capacitive coupling or by induction. Faraday dealt with induction. Maxwell’s contribution to was to separate “conduction” current from “capacitive” current, the latter which he called “displacement” current.

Combing the above yields:

Variable A is, of course, the area of our capacitor’s plates. As long as we’re dealing with parallel plate capacitors, we can use the equation in the form above. More generally, however, area can be expressed as:

Here, f(s) is a function that is integrated over a surface (or an envelope) to calculate the flux. In our case the function f(s) is the time derivative of the electric field density, D, f(s)=∂D/∂t, so:

We can now state all four of Maxwell’s equations in general form: 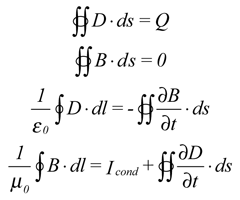 Somewhat more intuitively, we can state Maxwell’s Equations in words:

Next, I’ll try to explain why radio waves radiate.

First, I’ll have to take you to a place far, far away where there are no conduction currents and no free charges, a place we can truly call free space. There, Maxwell’s Equations reduce to the following: 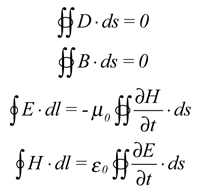 In free space, we need only to deal with the third and fourth of Maxwell’s equations;

Our next task is to find expressions for the electric and magnetic fields that satisfy these two equations. I’ll do this using a time honored tradition in calculus. I’ll guess at the answer and then plug the answers into the equations to see if they work. Figures 2 and 3 show my guesses. 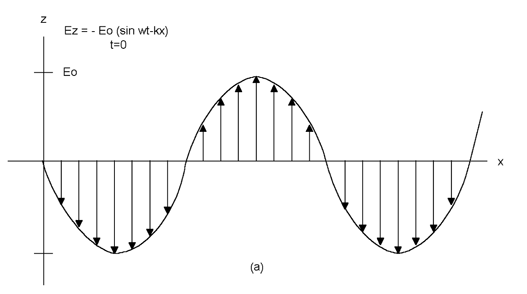 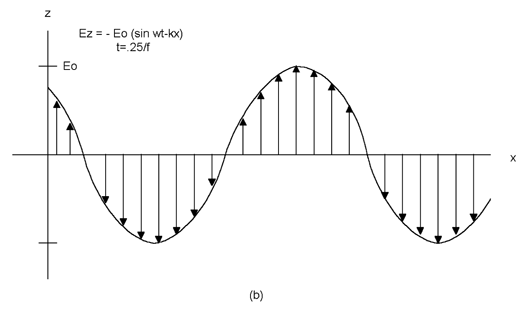 Figure 2: This proposed solution to Maxwell’s Equations in free space uses, as one component, the electric field illustrated. It moves to the right with time. 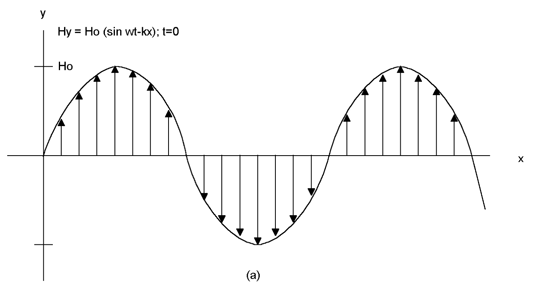 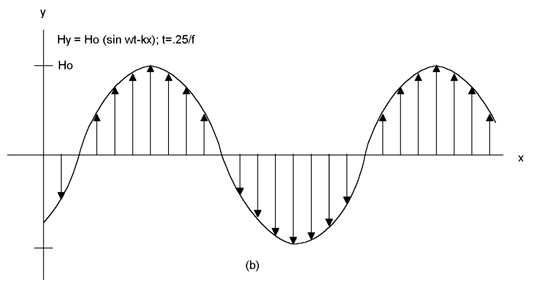 Figure 3: This proposed solution for Maxwell’s Equations uses, as its other component, a magnetic field as shown. It is time correlated with the electric field of Figure 2, but is oriented 90 degrees from it in space. 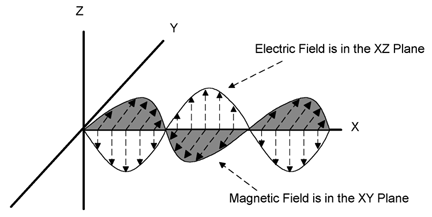 Figure 4 : The two fields of Figures 2 and 3 are combined on one graph. The electric field lies in the XZ plane and the magnetic field in the XY plane. Thus, their polarizations are 90 degrees apart. Together they form a “plane wave.”

My proposed solution is a set of two fields, set perpendicular to each other as shown in Figure 4. Figure 2(a) shows the electric field at time equals zero. The electric field vector points in the z direction and it varies sinusoidally with time. As such, the entire waveform appears to move in the direction the x direction. Mathematically, it is expressed as:

ω = The frequency in radians per second = 2πf

f = The frequency in Hertz

λ = the wavelength in meters

Likewise, the magnetic field is oriented in the y direction and it also appears to move in the x direction. It is expressed as:

Figure 4 shows this combination which is known as a “plane wave.” The crests of the magnetic and electric fields seem to move through space in the positive x direction as if they were a wall, hence the term plane wave.

Next, we’ll plug the proposed solution for the electric field into the third of Maxwell’s Equations. To do this we’ll have to calculate a line integral. The line integral is equal to the field times the distance around a closed loop.

Fortunately, there is an easy, graphical way to calculate the line integral. What we want to do is to find a convenient loop and multiply the field times the perimeter of the loop. The location that we pick for our convenient loop is shown in Figure 5(b). The loop aligns on the left with location x0 and on the right with x1. 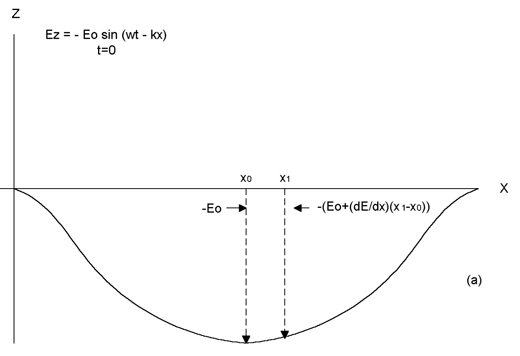 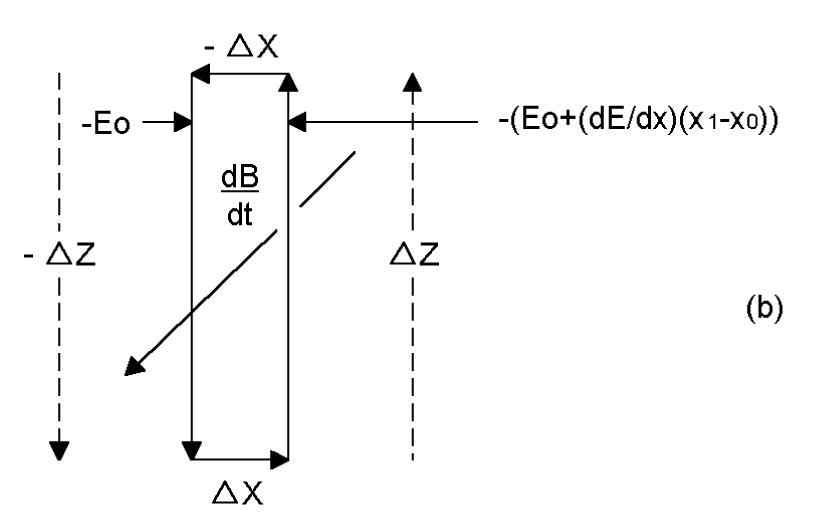 In order to preserve the right hand rule, which requires us to move in a counter clockwise direction, we’ll begin our line integral calculation by a move of a distance -∆ z as shown in Figure 5(b), creating the first component of our loop integral. This first component is equal to (-E0)(-∆ z) = E0 ∆ z. There’s no electric field in the x direction, so we don’t have to consider the top and bottom sides of our rectangular loop. On the right side of our loop, we move a distance ∆ z times the field at that point. Adding the contributions of our loop movement together and noting that ∆x ∆z equals the area of the loop (A), we get:

Substituting this expression for the line integral of the electric field, and noting that: 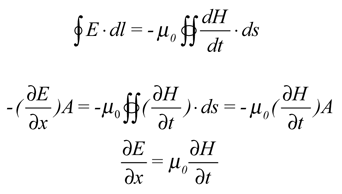 We can do the same for magnetic fields deriving a similar equation:

Taking the derivative of Ez and Hy with respect to time and distance yields: 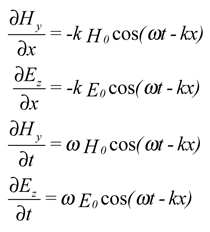 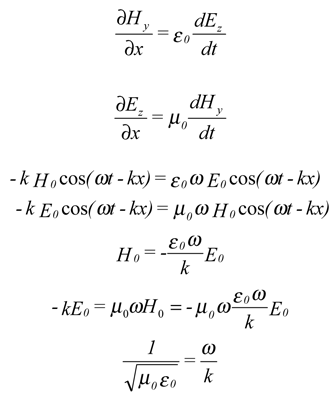 The proposed solution works if 1/√(µ0 ε0) = ω/k. Does it? Note that ω=2πf, k=2π/λ and therefore ω/k=fλ. The units of fλ are cycles/second times meters/cycle, or meters/second = velocity. The term ω/k must be the velocity of the wave as it moves in the x direction.

This, of course, is the speed of light (c), which is exactly what we would expect.

Before closing this chapter, we’ll use the equations above to derive two characteristics of plane waves. Since the electric field is expressed in terms of V/m and the magnetic field in A/m, dividing E by H at any given point in space produces a resultant is in units of V/A, or Ohms. In free space, this ratio is:

The “impedance” of free space, we can conclude, is 377 ohms.

We can also multiply the magnitudes of the electric and magnetic fields at any point in space yielding a resultant that is in units of V/meter x A/meter or Watts/meter2. From that we can conclude that a plane wave transmits power in the direction of its motion.

P is known as the Poynting vector.

Glen Dash is the author of numerous papers on electromagnetics. He was educated at MIT and was the founder of several companies dedicated to helping companies achieve regulatory compliance. Currently he operates the Glen Dash Foundation which uses ground penetrating radar to map archaeological sites, principally in Egypt. 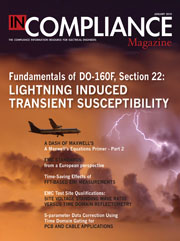