A Brief History of Electrostatic Discharge Testing of Electronic Products

With the inventions of the transistor in 1948 and the Integrated Circuit in 1958, and the utilization of these major breakthroughs in the development of computers and other electronic devices, industry began to worry about and to design components and end-products that could survive the discharge of electrostatic discharges to chips, printed circuit boards, and final packaged-products.

The 1960s and 1970s saw individual companies developing their own test values and test techniques. The international standards organizations got involved in the 1980s with the release of IEC 801-2 on ESD limits and test methods. Since the 1980s, most companies test their end-products for ESD immunity to IEC 801-2 and its follow-on standard, IEC 61000-4-2.

Electrostatic discharge (ESD) phenomena have been known since the Greek civilization was dominant thousands of years ago. People in cold climates were very familiar with the ESD effect in a low-relative humidity environment as was frequently experienced in indoor environments in the winter time.

Most electronic companies in the 1960s and 1970s were aware of and concerned with ESD. The companies tended to have proprietary standards and test methods on ESD and were not interested in exchanging information with their competitors on ESD.

The Human Body Discharge model was commonly used by the companies to test products with an ESD tester. The capacitance of a human being was estimated to be in the 100 to 250 picofarad range depending on the size of the person and the length and shape of the human’s shoes. A common discharge value for early standards was 5000 volts. The discharge resistance was often taken as 500 ohms; the resistance of the human finger. The discharge was an ‘air-gap’ discharge which closely simulated the actual ESD phenomena.

There were some companies that were using a contact discharge approach to ESD where the ESD tester was in physical (metal to metal) contact with the electronic equipment. The contact discharge was a more repeatable event than the air discharge method.

The development of the HCP started with a well-known cash-register company in the 1970s. At that time, they had an air-discharge ESD gun which was used for their product development testing. The EMC engineers very-cleverly developed an all-plastic cash register and the ESD gun would not discharge to the cash register, and, therefore, by definition the product passed the ESD test.

The EMC Engineers went back to work; they placed a metal ground plane under the all-plastic cash register and discharged to the metal ground plane (now known as the HCP) to simulate the real-life experience. They eventually came up with design fixes that allowed the all-plastic register to pass the ESD test. While they were developing the HCP, they realized the HCP could be turned on its side to represent a vertical metal file cabinet and they proceeded to design the cash register to pass that test also (that HCP on its side is the present-day Vertical Coupling Plane (VCP) test.

One computer company in the 1970s began experimenting with ESD relative to its computers and computer peripherals. A Van de Graaf generator, some high-voltage sources, and a green nylon carpet were all tried as potential ESD generators. It was decided to go with the standard green nylon carpet to begin with. A number of volunteers were organized and asked to shuffle their feet on the carpet (in a controlled humidity environment) while holding on to a scientific electrostatic voltmeter. Again, in most cases, at relative humidity-levels of 10% and greater, about 5 to 7 kilovolts was the maximum value measured on the human subjects.

One product made by the computer company had a wide distribution in Australia and it had ESD problems whereas deliveries to other countries had no ESD problems. An engineer from the company who worked with the Australian customers, visited the EMC lab and discussed the issue with the EMC lab engineers. The engineers took the Australian engineer into the controlled environment and asked him to shuffle his feet while connected to the electrostatic voltmeter. Much to the EMC lab’s surprise, the voltmeter registered 18000 volts! After some discussions with the Australian native, it was discerned that he had normal clothing on his body with the exception of his shoes which were made of kangaroo leather. Needless to say, the lab made that fact known while in parallel it developed an engineering fix to its product to allow it to pass 18 Kilovolts.

The 1980s saw the release of the IBM-Personal Computer in 1981 which legitimized the PC market and it saw a movement of the computer industry and similar electronic industries (medical equipment, laboratory equipment, etc.) to international standards on Electrostatic Discharge.

The standard carefully pointed out in a NOTE that: From the technical point of view, the more precise term for this phenomenon would be static electricity discharge. However, the term electrostatic discharge (ESD) is widely used in the technical world and in technical literature. Therefore, it has been decided to retain the term ESD in the title.

The test was an air-discharge test.

The 1984 edition did have a requirement for discharging to the earth reference plane to simulate discharges to objects in the vicinity of the Equipment Under Test (EUT). 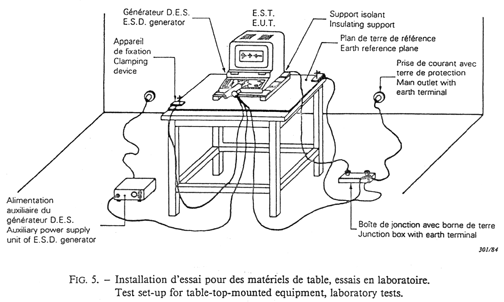 One of the major changes in the standard was that the contact discharge was the preferred test method not the air discharge method.

The energy storage capacitor remained at 150 pF but the discharge changed to 330 ohms plus or minus 10%. The output voltage was up to 8 kVolts for contact discharge and 15 kVolts for air discharge; both positive and negative. The rise-time at 4 kilovolts had decreased to 0.7 to 1 nanosecond. The values of the parameters of the discharge current had to be verified with a 1 GHz oscilloscope. The grounding cable from the VCP and the HCP to the ground reference plane had 470 kohm resistors located at each end of the cable.

The parameter of the ESD Generator stayed constant from the 1991 – 801-2 standard; that is, the energy storage capacitor was 150 pF, the discharge resistance was 330 ohms, and the output voltage of 8 kV for contact discharge and 15 kV for air discharge. The polarity of the output voltages was both positive and negative. 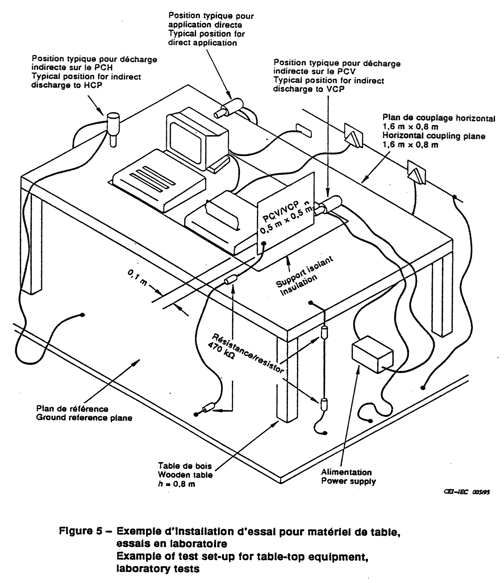 Electrostatic discharge testing has evolved from a company-based reliability test in the 1960s and 1970s to a performance test on electronic products in the 2013 timeframe. The requirement is for electronic products to operate successfully when subjected to ESD phenomena representing the real-world environment as simulated in an EMC laboratory. The emphasis has switched from the susceptibility of equipment to quoting how immune a product is to air-discharge and contact discharges from a portable ESD tester whose output is compliant with the latest international standard criteria.

Note
The author thanks the International Electrotechnical Commission (IEC) for permission to reproduce Information from its International Standards IEC 60801-2 ed.1.0 (1984) and IEC 60801-2 ed.2.0 (1991). All such extracts are copyright of IEC, Geneva, Switzerland. All rights reserved. Further information on the IEC is available from www.iec.ch. IEC has no responsibility for the placement and context in which the extracts and contents are reproduced by the author, nor is IEC in any way responsible for the other content or accuracy therein.