The immunity to ESD of present-day electronic components and devices has further decreased due to the high sensitivity of ICs.

Electronic devices can be exposed to electrostatic discharge (ESD). The discharge process generates rapid electric and magnetic processes that can impair the function of the electronic devices. Devices are tested for their immunity to ESD using special ESD generators and test setups (EN 61004-2).

The effort and expense for developers to achieve ESD immunity in compliance with EN 61000-4-2 has steadily risen over recent years.

The causes for this increased effort and expense are firstly the technology-related increase in sensitivity of ICs. Secondly, position changes, tilting and turning of the ESD gun yields different measurement results during ESD testing. That means even device or component tests performed with the same ESD gun will not be identical. Thirdly, it has been discovered that different types of ESD generators (“ESD guns”) create different scattering in the test results. Device tests performed with different ESD generators are therefore also not always comparable.

A More Detailed Description of the Problem

IC sensitivity to interference is increasing. One reason for this increased sensitivity is that the structural width of ICs is shrinking. ASICs and microcontrollers are currently approaching 10 nm. Shrinking structural geometries allows higher switch speeds of the transistor cells while also reducing supply voltage. This necessarily increases IC sensitivity to interference. Increased switch speed in ICs gives rise to a greater possibility of interference from shorter disturbance pulses (less than or equal to 1 ns). Several years ago, these relatively short disturbance pulses were not an issue; they were not “seen” by the ICs.

Changes in the Length of ESD Guns (ESD Generators)

The ESD generator is typically in the shape of a gun with a metal tip. When testing “contact discharge”, this metal tip is touched onto metallic parts of the test setup in order to trigger the test pulse. The current pulse introduced is relevant to the interference. It is defined in the standard EN 61004-2. Its curve shape parameters should define the interference effect during the test procedure.

In practice, the ESD gun does not necessarily obey the curve shape parameters. Interference phenomena occur that are difficult to explain. For example, certain EUT may only experience interference when the right side of the gun is facing it, while all other sides cause no interference. This would be explained by fields emanating from the gun housing that act on the EUT.

ESD guns cause rapid transient electric and magnetic fields. These fields emanate from the housing of the ESD gun and can act on the EUT during testing. The ICs of the electronic circuit will therefore react with failures according to their sensitivity. The sensitivity of ICs depends on the manufacturer and technology. The faster an IC is, the shorter disturbance pulses it can see and convert into errors. As the speed of an IC increases, so does its sensitivity to pulsed fields. 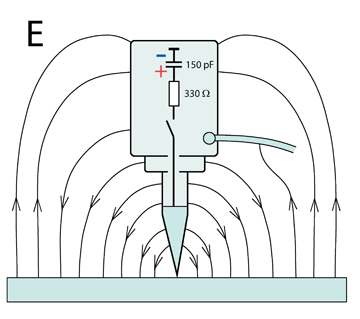 Figure 1a: Electric and magnetic field coupling of the ESD gun 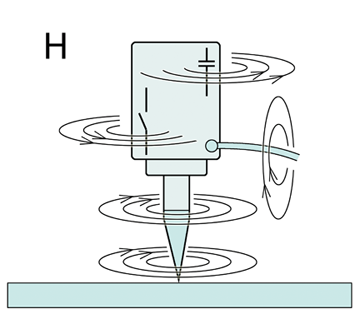 The electric pulse fields couple capacitively from the gun into signal lines, test points, pads, IC pins and  internally into the IC. The coupling capacity is in the fF range. Determinative of the gun’s interference effect is the field strength E as well as its change over time dE/dt.

The magnetic field induces voltage in conductor loops in the electronics. These loops can exist as conductive traces on the component or inside the IC. Determinative of the interference effect is flux φ or dφ/dt.

ESD guns contain all kinds of internal conductor systems, switches and components that can generate E or H fields. The high voltage switch of the ESD gun can switch in the range of 100 ps. The tester can hold the gun tip to the EUT at different distances and orientations. The gun housing can in some cases rest against the EUT. The gun is deliberately turned and tilted. This brings different field generating parts of the gun closer to the electronics.

It is known from practice that ESD guns have different interfering effects depending on their type and position.

Some explanations are needed to clarify the phenomenon of test result scattering due to different generator types: In ESD tests employing contact discharge, a pulse with a 0.7ns edge is used. In this case, one brings an ESD gun (i.e. the generator) into contact with metallic parts of the device. The disturbance pulse on the electronic circuits is transmitted to the electronic circuits by capacitive or inductive coupling. The 0.7ns edge is differentiated, resulting in a 0.7 ns pulse. This pulse interferes with the ICs.

Significantly higher frequency processes than the 0.7 ns ESD edge or the 0.7 ns pulse inside the circuit must, however, be present to generate striking differences in the disturbance amplitude in ICs with very high switch speeds. If one raises the resolution of the ESD edge (Figure 2) e.g. when measuring on an oscilloscope, then one notices high frequency transients in the rising edge depending on the type of generator. 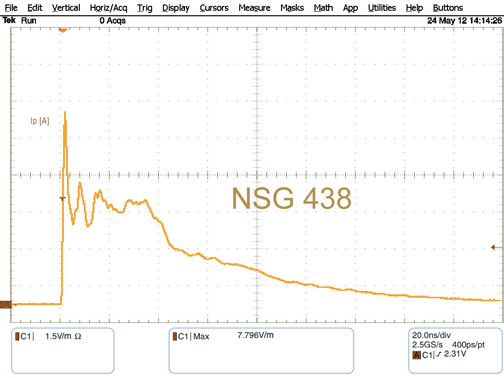 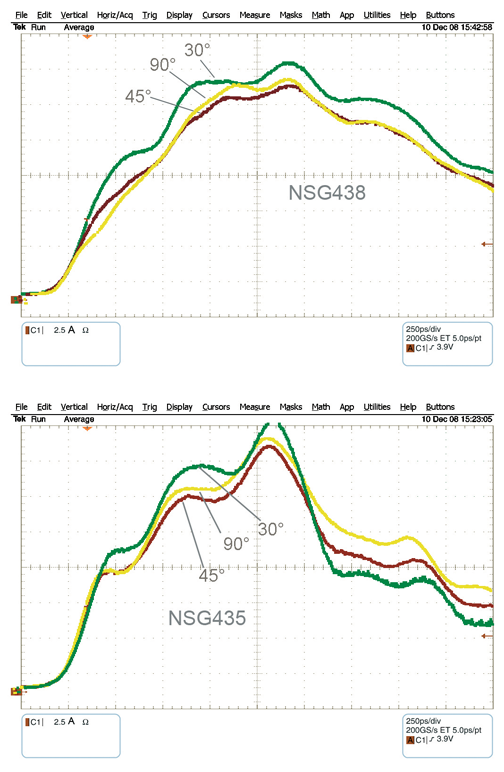 Figure 3: 0.7 ns edge of the ESD pulse at higher resolution at different inclination angles of the ESD gun on GND. (Gun 1 and Gun 2)

The ESD gun triggers transients of edge widths below 200 ps in conjunction with the inductive and capacitive elements in the test setup.

The higher the frequency of these transients, the better they penetrate into electronic devices by inductive or capacitive coupling mechanisms. The transients of the rising ESD edge accordingly penetrate better into devices than the 0.7 ns ESD pulse edge itself. These observations help explain the scattering and higher device sensitivities in ESD immunity measurements.

The generators mentioned and measured here are standard-compliant. The standard on which this is based, however, does not yet take into account the currently relevant higher switching frequencies of ICs in conjunction with the above mentioned transients in electrostatic discharges in the GHz range. This problem needs to be resolved by technical advancements.

In addition to conducted coupling in pins, ICs are furthermore interfered with electric and/or magnetic fields (Figure 4). 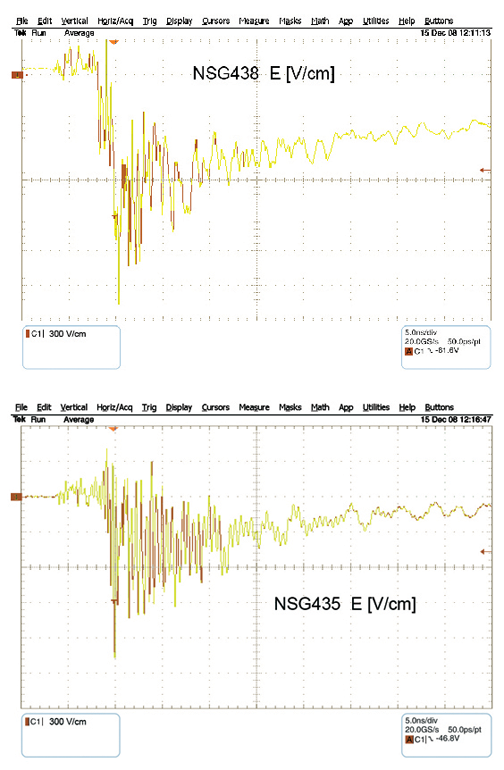 Figure 4 shows the electric field strength that ESD generators themselves can generate via their housing. The field strength was measured at the surface of a GND plane beneath the ESD generator. The amplitude and shape depend on the measurement point as well as the type of ESD generator. When fed with 4 kV, values of 1 to 2 kV/cm are reached. The course and amplitude of these values depend strongly on the measurement point beneath the generator and on its rotation and tilt angle. Significantly higher field strength values (> 10 kV/cm) are reached upon coupling into the neighbouring metallic parts. These could be, say, connector housings or heat sinks.

The immunity of ICs to field interference can be measured using special generators. The test pulse 0.2/5 ns was derived from the high frequency transient of the ESD generators (according to EN 61000-4) [2].

IC immunity to pulses can be relatively easily measured using the setup shown in Figure 5. The typical difficulty achieving conductive coupling in IC pins, especially in multipole ICs, does not exist. Figure 6 shows the results of measurements of microcontrollers. 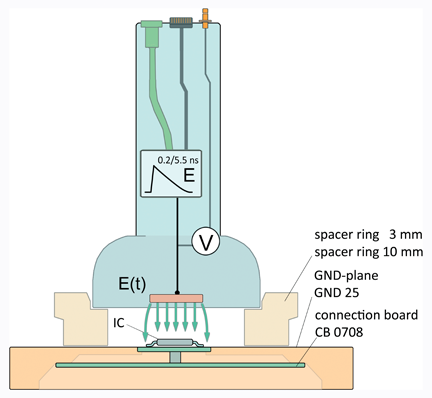 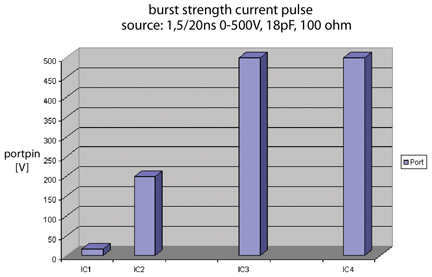 Sensitive ICs may be used contractually by adhering to specific placement specifications. They must not be arranged on the edge of the component or near to metallic parts carrying ESD pulse voltage. This applies even if the metallic parts are grounded.

CPU components are more highly integrated and possess lower supply voltages, making them even more sensitive. In CPU components, few pins are typically reached over conducted coupling these days. These are mostly pins whose lines run past pin-and-socket connectors such as, for example, the interfaces USB, Ethernet etc. These highly integrated ICs are interfered with to a higher proportion by external electric or magnetic fields via their housing (heat sink).

Pulse voltage immunity has drastically decreased for certain ICs in recent years. This substantially increases the effort and expense in the EMC development of electronic devices. This trend will continue as the degree of integration continues to increase. This can be countered by targeted development of immune ICs. This will work even for small structural widths. This concept has already been implemented in several examples. The test generators required for this process have been developed in recent years [3].