Are Cheaper Fuel Cells On The Horizon? 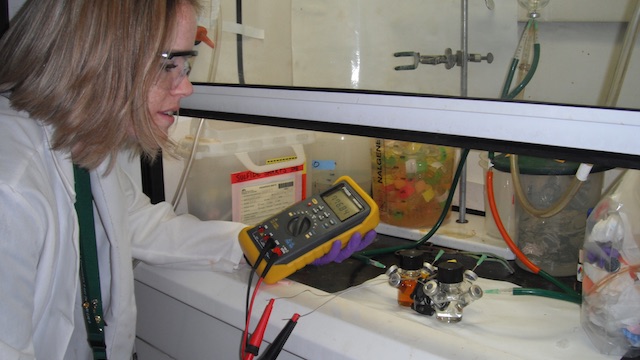 Researchers at Rice University are working on a method to optimize fuel cells. This technology could result in cheaper, more effective power. Thanks to a new study, scientists believe that nitrogen-doped carbon nanotubes, along with modified graphene nanoribbons, could prove suitable replacements for platinum. This would allow for fast oxygen reduction, an essential part of the process in which fuel cells turn chemical energy into usable electricity.

This data comes from a series of computer simulations run by Rice scientists. The findings, which appear in the Royal Society of Chemistry Journal Nanoscale, came about as part of a project to see how researchers could improve carbon nanomaterials for fuel-cell cathodes. Scientists determined that atom-level mechanisms that doped nanomaterials use to catalyze oxygen reduction reactions.

Using these computer simulations, researchers on the project learned exactly how to improve the materials needed for fuel cells. Scientists can chemically modify (dope) conductive nanotubes and nanoribbons to alter their chemical bonding characteristics. Then they can be used as cathodes. The computer models revealed that thinner carbon nanotubes that contain a higher concentration of nitrogen would perform the best. This is because oxygen atoms easily bond to carbon at0ms closest to the nitrogen. Nanotubes have an additional advantage over nanoribbons thanks to their curvature. This distorts the chemical bonds and results in far easier bonding.

The real challenge was making a catalyst that isn’t too strong or weak to bond with oxygen. Researchers can now tune the binding energy of nanotubes thanks to their curve. Additionally, co-doping graphene nanoribbons with nitrogen and boron has proven an effective way to enhance the oxygen-absorbing abilities of ribbons.

“While doped nanotubes show good promise, the best performance can probably be achieved at the nanoribbon zigzag edges where nitrogen substitution can expose the so-called pyridinic nitrogen, which has known catalytic activity.”

The scientists believe that these new materials could prove as efficient as platinum, and far more cost-effective. The research done on this topic was supported by a variety of institutions including the Army Research Office, the Youth 1000-Talent Program of China, the Tsinghua-Berkeley Shenzen Institute, and the Development and Reform Comission of Shenzen Municipality.