Apple, Inc. has issued a recall for the three-prong AC wall plug adapters included in the Apple World Travel Adapter Kit sold before February 2015, as the wall plug adapter can break and expose the metal portion of the adapter, posing an electric shock risk. 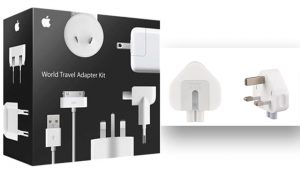 The recalled adapters were made for use primarily in the United Kingdom, Singapore, and Hong Kong and were also sold with Mac computers and iOS devices. The recalled three-prong AC wall plug adapters are white with no letters on the inside slot where it attaches to an Apple power adapter. Redesigned adapters are white with gray on the inside portion that attaches to the power adapter.

Apple has received six reports from other countries of wall plug adapters breaking and consumers receiving shocks, including two reports of consumers who were medically evaluated and released without the need for further medical treatment.