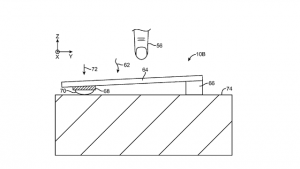 While smartphone users are perpetually tethered to their chargers, researchers are busy designing better batteries and more convenient wireless chargers. Now, Apple has designed a system for adding solar power to their devices. On July 16 Apple received a patent for “Wireless Devices with Touch Sensors and Solar Cells.”

The patent describes applying solar cells to a touch display surface, such as Apple’s trackpad, wireless keyboard, and parts of the iPhone. The system would convert ambient light into electricity to power the device. In Apple’s legalese:

Will the next iPhone be solar powered? Probably not, but solar power could help prolong battery life for some Apple products. This latest patent is just one of Apple’s thousands of patents, including dozens relating to solar power for future devices.