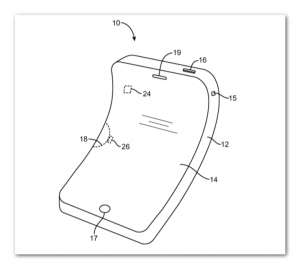 The United States Patent and Trade Office has granted Apple a patent for “flexible electronic devices,” or in other words, a bendable iPhone. When the iPhone 6 and 6 Plus launched in 2014, rumors circulated on social media that the devices were so weak that they could easily become warped, with many consumers complaining about the supposed “bendgate” design flaw. Nobody wants a phone that accidentally bends under pressure, but if Apple designs a device that bends on purpose, it’s a whole different story.

According to the patent, the main benefit of making electronic devices more flexible is that they would be more resilient to drops. However, the flexibility would also give the device interesting new ways to receive commands from users. Instead of pushing a button or swiping a touch screen, people could twist or squeeze the phone to turn it on, answer a call, or change the volume. Apple writes:

Electronic devices may also be provided with user interface components (input-output components) such as buttons, microphones, speakers, piezoelectric actuators or (for receiving electrical input from a user or tactile feedback to users), other actuators such as vibrators, pressure sensors, and other components. These components may be mounted under portions of a flexible display.

The device would be made of a special housing that could include fluid filled or air filled pockets so that the device could go from stiff to flexible and back again. The batteries and circuits would also be flexible, as would the display, which Apple suggests would be made from a flexible organic light-emitting diode (OLED) array. The display would include a flexible touch-sensitive layer (in Apple’s words: a sheet of polymer with an array of transparent capacitor electrodes for a capacitive touch sensor), covered with flexible plastic or a thin, flexible layer of glass. 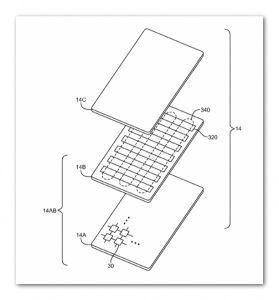 You wouldn’t be able to roll up the phone (like the OLED television that LG showed off at this year’s Consumer Electronics Show), but it would include “portions that are able to be flexed” so it could be tucked away into a pocket.