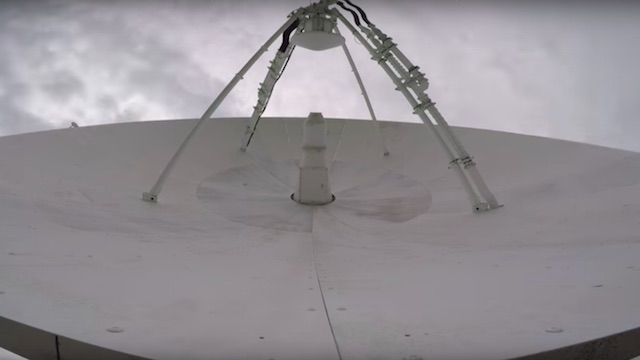 NASA is steadily expanding its ability to communicate with and provide support to spacecraft sent on long-distance missions. Earlier this month, a new communications antenna in Fairbanks, Alaska became operational. It joins a growing — and increasingly powerful — way for scientists on the ground to transmit data to and from and assortment of spacecrafts.

NASA has three primary communications networks. They are the Deep Space Network, the Space Network, and the Near Earth Network. The antenna in Alaska falls under the umbrella of the Near Earth Network (NEN). Of course, ‘near earth’ can be a relative concept; some of the spacecraft in questions are up to 1.2 million miles away. NEN is unique in that it is a direct-to-ground communications network. It doesn’t rely on any space-based devices to relay communications. That means the NASA missions communicate directly with antennas on the ground, when they are within the line of sight. NEN antennas also track and command the spacecraft, keeping a meticulous record of its location and any minor corrections that need to be made.

The new antenna in Alaska is actually an upgrade from an outdated model at the same facility. This antenna has several distinct improvements over its predecessor, most notably a markedly wider selection of services. The Alaskan antenna has been tapped to provide support for a number of current and future Earth-observing missions. In these missions, spacecraft will gather vital data about the Earth itself: environmental air quality, reports on the water cycle, and more.

Known as AS-2, the antenna will join two others with similar designs, called AS-1 and AS-3. The antenna will be operated by students and alumni at the University of Alaska Fairbanks, who have come to view it as more than a simple device or tool; it has become part of the history of the institution in its own right.

“When we installed the new antenna, people stopped by and told us their stories about it. It was kind of neat to hear people’s connection to the antenna, to know they care about it.”

Joe O'Brien, the AS-2 project manager at University of Alaska Fairbanks