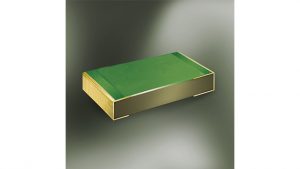 SCHURTER’s new USN 1206 is designed to meet the ever increasing challenges associated with packing density in power electronics. The new chip fuse offers temperature-sensitivity suitable for both overcurrent protection and protection against excessive ambient temperatures.

The USN 1206 is not a pure thermal fuse, per se.  It requires a current flow to blow, thus providing protection against overcurrent, just as well as any conventional fuse.  In addition, it is also designed to protect power semiconductors in automotive applications against over-temperature.  The fuse has a current-time characteristic which shifts as a function of the ambient temperature.  As a result, a specific trigger at a certain threshold value can be achieved with increasing temperature. The 12 A current rated USN 1206 has high I2t values at 32 VDC and a slow blowing characteristic. It has a breaking capacity of 80 A at 32 VDC and 170 A at 16 VDC with an operating temperature range of a -40 degrees C to a +125 degrees C.

The new USN 1206 meets the AEC-Q200 standard making it suitable for automotive applications requiring the highest reliability under particularly difficult conditions (heat, vibration, mechanical and cyclic strength).  Qualification is according to each unique customer requirement on request. The production and qualification of the fuse is carried out in agreement with the customer according to the requirement profile of the desired time-current tripping characteristic as a function of the ambient temperature. Additionally, the USN 1206 is a good choice wherever temperature-critical processes occur, or even when a specific intrinsic characteristic is required.  The temperature-sensitive SMD fuse is reflowable at 245°C according to IEC 60068-2-58.  The epoxy glass housing makes it tight against the potting compound, thus making the fuse suitable for explosion-proof applications according to ATEX / IECEx as well. UL approval can be obtained.