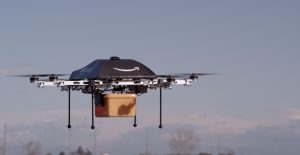 Back in 2013, Amazon unveiled their five year vision to develop and release Prime Air, a drone delivery system, capable of providing consumers with a 30 minute post-purchase delivery time.

Previous attempts to fulfill plans of parcel delivery via drone have been blocked in the United States and the United Kingdom because it is illegal to fly Unmanned Aerial Vehicles (UAV) out of the line of sight. However, in a press release issued on July 25, 2016 Amazon announced plans to partner with the United Kingdom (UK) Civil Aviation Authority to test its drone delivery systems to explore safe use of drone delivery technology.

“We want to enable the innovation that arises from the development of drone technology by safely integrating drones into the overall aviation system. These tests by Amazon will help inform our policy and future approach.”

The partnership to safely test the drone technology will serve to develop future policies and regulations in this area. Three key areas that the effort will explore include:

Although public concerns remain regarding privacy and safety matters advancing this area of technology could pave the path for future use drone technology systems to provide medical assistance, rescue operations resources, police surveillance, and other beneficial services.