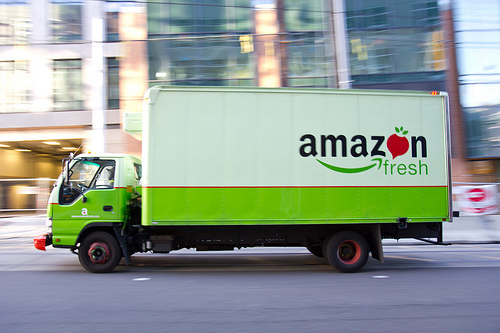 Retail giant Amazon wants to deliver goods to your front door just moments after you place the order online, and they are considering several engineering solutions to make it happen. They already offer one-hour delivery service in Manhattan and same-day delivery in some markets. Although CEO Jeff Bezos announced plans for a drone delivery service called Air Prime, plans are on hold until the Federal Aviation Administration finalizes regulations. For now, commercial drones are not an option in the U.S. However, on March 19th the FAA announced that it gave Amazon an experimental airworthiness certificate, so expect to hear more about Air Prime soon.

In the meantime, Amazon filed a patent for a ground-based solution involving 3D printing. The patent was filed back in November 2013 and the U.S. Patent and Trademark office published it in February. The application, entitled “Vendor Interface for Item Delivery Via 3D Manufacturing On Demand,” describes a system in which an order is received electronically (i.e., on amazon.com) and then manufactured near the customer with 3D printers. The printers would be located at one of three locations—warehouses, nearby pick-up locations, or in “grocery delivery trucks” like Amazon Fresh. The patent application suggests that the proposed system would reduce delivery times and free up capital that is currently tied up with inventory.

A retail analyst told In Compliance that the plan aligns with two of Amazon’s large strategic initiatives—creating additional revenue streams and becoming the leader in rapid delivery.  The proposed 3D printing delivery system could help Amazon catch up to other retailers in the 3D printing market. Although Amazon has a 3D store online, it doesn’t yet come close to matching the top 3D printing retailer Shapeways. Furthermore, companies such as Walmart are considering buying several large 3D printing companies.