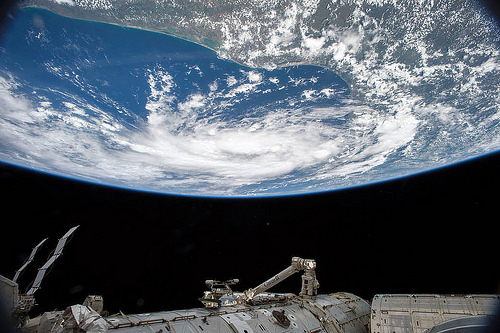 While sitting in his garden shed the other day, Adrian Lane chitchatted with astronaut who flew 200 miles overhead. Lane, an amateur radio enthusiast from Gloucestershire​, England, had been tracking the International Space Station’s route so that he could try to say hello when it passed over his home. He got the timing just right, catching the space station in range for four minutes, which allowed Lane to make small talk with an American astronaut for 50 seconds before losing contact. Lane asked what life is like in space. The answer: “very dark.” Despite the mundane conversation, he was thrilled. Lane told the Telegraph, “I was buzzing. It’s not every day you get to talk to some guy out in space.”

Astronauts usually use their radios for scheduled chat times with schools, but they are also randomly available for unplanned conversations during their breaks. Any licensed ham radio operator can tune in with a basic setup. From the space station’s amateur radio website: “A typical ground station for contacting the ISS station includes a 2-meter FM transceiver and 25-100 watts of output power. A circularly polarized crossed-Yagi antenna capable of being pointed in both azimuth (North-South-East-West) and elevation (degrees above the horizon) is desirable. But successful contacts have even been made with vertical and ground plane antennas.” The tricky part to making contact is catching an astronaut who has a few minutes to spare while the space station passes by at 18,500 miles per hour.