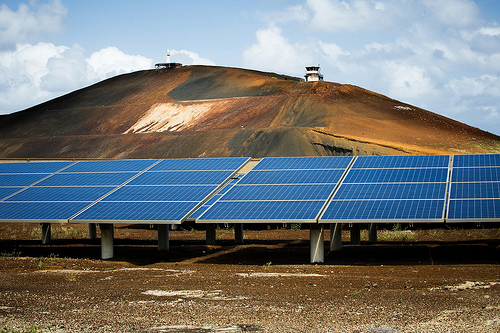 Creative engineering has recently made wind turbines and solar panels more efficient. The next big challenge in sustainable energy is finding a reasonable way to store energy so that it will be available on demand, even when the sun isn’t shining and the wind isn’t blowing. Earlier this year, Elon Musk unveiled Tesla’s solution—a home battery and a scalable commercial storage system for electrical utilities. Now, a team of Harvard researchers developed another option, with a new alkaline flow battery made of nontoxic materials.

A flow battery is a type of rechargeable battery that uses chemicals stored in tanks that are separate from the active part of the cell. Flow batteries have great potential for storing large amounts of energy (such as for the grid), but they are usually made with toxic and expensive materials. The Harvard team developed a battery that is similar to commercial flow batteries, but it uses inexpensive, non-toxic organic molecules. The new flow batteries are made of unusually stable organic molecules that are commonly used in other industrial applications, such as in the dye industry, for paper pulping, or as a food additive.

The researchers described their battery in a paper published in Science:

Flow batteries permit more economical long-duration discharge than solid-electrode batteries by using liquid electrolytes stored outside of the battery. We report an alkaline flow battery based on redox-active organic molecules that are composed entirely of Earth-abundant elements and are nontoxic, nonflammable, and safe for use in residential and commercial environments. The battery operates efficiently with high power density near room temperature.

This new alkaline flow battery could provide a safe and cost effective storage solution for renewable energy. This would help solve the gap between the sporadic energy supply that natural resources provide and the on demand power needs of the electrical grid.