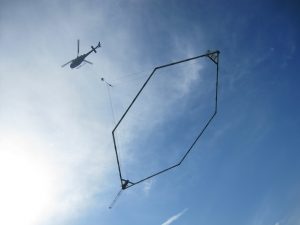 With California facing one of the worst droughts on record, large aerial electrical equipment is helping farmers find underground sources of water so they don’t waste a drop. The new imaging technology is from Denmark, where a group of researchers came together to develop a method for creating high resolution maps of underground water. The company, called SkyTEM, uses helicopters to sweep an 80-foot array of electrical equipment over the land, collecting data about soil and water which will later be represented by a colorful 3D map.

The system’s transmitter sends electromagnetic pulses into the Earth’s subsurface to measure the ground’s conductivity. A receiver coil aboard the helicopter then measures the returning voltage, which can be as small as one billionth of a volt, to determine exactly what is underground. While developing the system, the SkyTEM team created a low-noise receiver that eliminates almost all of the primary noise from the transmitter – a problem that they say plagues all airborne EM systems.

It’s not just a matter of locating water—detailed information about exactly what material is underground helps determine the best places to drill for water, since certain soils hold water better than others. Clay, for example, which is a bad material for drilling, would be identified by SkyTEM because it is electrically conductive.

This technique has been widely used to create maps for drilling oil, gas, and minerals in California, but this is the first time it will be used to survey the state’s groundwater. Other tools, such as underground water pressure-measuring devices and orbiting satellites, are also used to study groundwater systems, but the transient electromagnetic method produces a more detailed and accurate view. A detailed 3D model of the region’s sand, gravel, clay, and water will help scientists and farmers make drilling more accurate and less damaging.