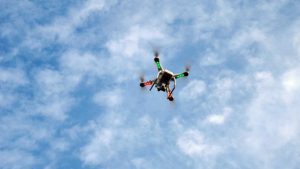 The United States Air Force has released a request for proposal (RFP) for a portable commercial device that can be used to stop small drones. The device would help the Air Force defend potential threats from small, inexpensive drones, such as popular quadcopters which can easily be bought at many stores or online. While these commercial drones have only been a minor concern so far, they could potentially become flying improvised explosive devices.

This requirement is to acquire a commercial product that can provide an interim solution to counter potential emerging threats to Government resources.

Therefore, drone defense system must be able to stop incoming threats. They should passively detect radio frequency signatures of either drones or their control stations, and then interrupt the link between a drone and its pilot, as well as disrupt the drone’s ability to navigate via satellite. Defense Systems reports that: “These measures must, however, comply with the hazards of electromagnetic radiation to ordnance, which encompasses the establishment and implementation of explosives safety standards, criteria, instructions, regulations, and electromagnetic emission control procedures of electromagnetic radiation (EMR) emitters.”