Agilent Technologies Inc. introduced the 33600A Series waveform generators with exclusive Trueform signal-generation technology. With Trueform, the instruments are able to deliver unmatched capabilities used to generate a full range of signals for even the most demanding measurements required by engineers and technicians during electronic device design and manufacturing test.

Agilent’s 33600A Series, which comprises four different one- and two-channel models, can generate waveforms up to 120 MHz at a 1 GSa/s sampling rate. The waveform generators provide the lowest jitter (less than 1 ps jitter, or 200x better than previous generation Direct Digital Synthesis generators) and lowest total harmonic distortion in their class, giving engineers the ability to generate the exact signals they need. Better jitter performance means that technicians and engineers can place edges more accurately, which helps them reduce timing errors in their circuit designs. With total harmonic distortion less than 0.03 percent and non-harmonic spurs below -75 dBc, the 33600A Series offers clean signals that don’t introduce noise, enabling users to get more accurate results.

As an added benefit, 33600A Series users can take advantage of easy software upgrades to expand their instruments’ capabilities, such as when they need to increase memory to 64 MSa or bandwidth to 120 MHz, for example. They can even upgrade their instruments to NISPOM file security.

While traditionally DDS has been the waveform-generation technology of choice, its intrinsic limitations mean users often have to work around its compromised performance or spend up to five times more for a high-end waveform generator. Trueform technology eliminates these challenges by combining the best of DDS with a point-per-clock architecture.

More information on the 33600A Series is available at www.agilent.com/find/33600A. 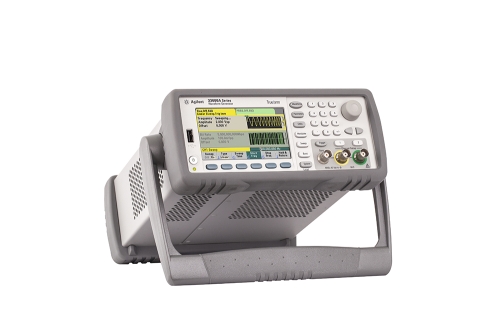