Advances in Computer Technology Apply to the Battlefield 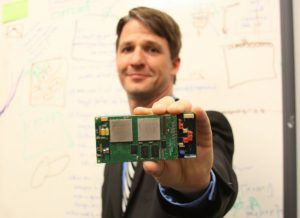 These days, it’s incredibly common to carry powerful computing devices in our pockets. The miniaturization of technology in recent decades is easy to take for granted, so it’s hard to imagine that just 15 years ago, military-grade image and signal processing tasks meant hauling large, clunky computers or racks of dedicated processors onto test sites. The U.S. Army Aviation and Missile Research, Development and Engineering Center (AMRDEC), now has advanced imaging and signal processing that is small enough to fit inside battlefield weapons.

Electrical engineers at AMRDEC are working on taking a proactive approach to the Army’s latest technology, such as automatic target acquisition and tracking. Teams of engineers select the best algorithm for each task and make any necessary modifications depending on the given environment. Precision target acquisition allows soldiers to select a target from a reconnaissance image and send that target’s information to a missile on board an unmanned aerial system (UAS). This process presents technical challenges because it operates across different wavebands used by the UAS and missile sensors. “Trying to fit this kind of computation into a 2.75-inch missile constraint was unheard of until very recently,” Shane Thompson, ARMDEC electronics engineer told Army Technology Magazine.