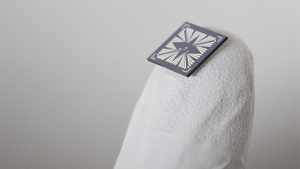 As early as next year, an adhesive stamp could be used to assess your health. The finished product will appear quite simple—a sweat sensing electronic stamp will attach to the skin using a water-based adhesive. However, the technology behind the sweat analyzing stamp is complex, so we got in touch with the researchers to learn more. Scientists at the Nanoelectronic Devices Laboratory (Nanolab) at EPFL, a Swiss research university, developed a new sensor that measures the tiny particles in a person’s sweat. ”The liquid-gate FinFET is exploiting silicon nanotechnology advances in devices designed for computation in order to achieve unprecedented sensitivity of an integrated transducer for protons and ions detection in sweat,” said EPFL researcher Adrian M. Ionescu. He attributes the sensitivity to the “excellent device electrostatics and the use of a high-k dielectric.”

The FinFET transistors are similar to those that are used in Intel’s advanced microprocessors. The chip has sensors and circuits in the same device, which enables amplification of signals. The researchers attached a microfluidic channel to the transistor in order to capture sweat. When the sweat molecules pass through the channel, their electrical charge disturbs the sensor and makes it possible to analyze the composition. By measuring the sweat at the molecular level, the electronic stamp can measure pH balance, track proteins, and ultimately assess a person’s health based on skin and body hydration.

The unique design makes the new device stand out from similar sensors because it has ultra-low power consumption (less than hundreds of nanoWatts), is highly scalable, and is more stable than other pH sensors on the market. “The transducer has been tested in real-life conditions in a continuous operation for more than 4 days and a drift of its threshold voltage as low as 150microVolts/hour has been observed,” said Ionescu. The transistors are just 20 nanometers thick, which is so small that arrays of thousands of sensors can be placed on one chip. A network of sensors would mean that in addition to measuring hydration levels, one small electronic stamp could identify calcium, sodium, or potassium in sweat.

The Nanolab team of EPFL is now working with Xsensio inc., a Swiss start-up company, to address challenges of using this technology in real-life applications and plan to introduce intelligent wireless sweat sensing stamps to the market by mid-2016. Taking the sweat-sensors out of the lab and into a commercial setting poses some challenges. “Some of the remaining challenges for having this sensor used in real-life wearable applications concern the sensor selectivity, the integration on flexible substrates and the integration of sweat collecting layers,” said Ionescu. He continued, “With these challenges solved, the EPFL’s ‘liquid-gate FinFET’ is expected to form a future core sweat analysis technology for intelligent electronic stamps.” The stamps would attach to a user’s skin with hydrogel adhesives and be expected to operate continuously for up to a week. The technology is described in detail in a paper that published in the May issue of ACS Nano.