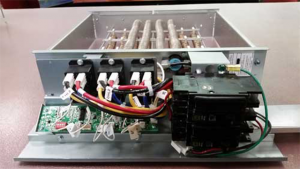 There have been ten reports of the heaters tripping circuit breakers, including one report of heat-related damage to the unit. No injuries have been reported. The recalled heaters were manufactured between November 2014 and March 2015 and installed in TAM7 and TAM8 air handlers as a primary or secondary heat source.

Due to the electrical risk, only a certified HVAC repair person should verify the model and serial numbers on the nameplate on the inside of the air handler. Consumers should immediately switch the system to cooling mode or off, and contact their Trane or American Standard independent dealer to schedule an inspection and replacement. Although the heating function should not be used, the system can can still be used for air conditioning or cooling. Trane is contacting its customers directly.