A Solar Cell That Works in the Rain 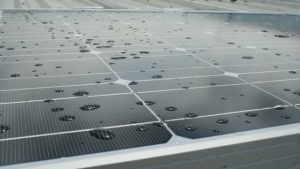 No matter how efficient solar cells become, they will always be limited by the simple fact that the sun doesn’t always shine. New research from Ocean University of China suggests that a graphene coating could help scientists achieve the dream of an all-weather solar cell.

By adding a graphene layer to a flexible solar cell, the researchers were able to prove that the cell could generate electricity from both sunlight and rain drops. This works because rain isn’t pure H20; salt is actually mixed with water. Graphene separates the salt, which is made of positively charged ions, such as sodium, calcium, and ammonium. The ions then bind to the graphene and form a double layer with the electrons already present, creating a pseudocapacitor. The potential energy between these two layers is enough to create an electric current. In this way, the solar cell creates electricity from the rain so that power is still generated even when it isn’t sunny out.

This graphene-coated solar cell is described in the prestigious journal Angewandte Chemie. It is only a proof of concept, and at 6.53% efficiency, the design isn’t practical yet. Part of the problem is that despite the benefits that the graphene layer provides on rainy days, it also makes it harder for the cell to collect energy from the sun. Still, these early results provide a promising option for a system that can collect energy from both the sun and the rain.