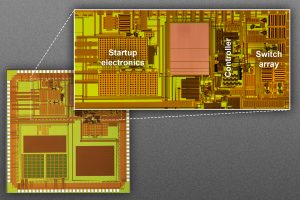 The chip’s main control circuitry: the controller that determines whether to charge the battery, power a device, or both; and the array of switches that control current flow to an external inductor coil.

Two electrical engineers from MIT have developed a new power converter chip that can harvest more than 80 percent of the energy that trickles into it, even at the typically low power levels of solar cells. The researchers say that their new chip is much more effective than previous versions of similar converters, which have only reached 40 or 50 percent efficiency. The chip could be used to create self-powered electronic sensors for many applications that require sensors to run for extended periods of time without needing to change or recharge their batteries. It is an especially promising solution for the Internet of Things, the idea that any object—from roads, to wearable devices, or even the human body—can be connected to the internet to share valuable data.

The team presented their converter at the Symposia on VLSI Technology and Circuits in Japan this June. This new chip is especially unique because it can simultaneously charge a battery and directly power a device, as well as powering the device directly from the battery. The chip measures just three millimeters on each side.  To build the low-power converter, the researchers used a single inductor to control the current flow and a bank of capacitors of different sizes to control the timing of the chip’s switches.

“We still want to have battery-charging capability, and we still want to provide a regulated output voltage,” explained researcher Dina Reda El-Damak. “We need to regulate the input to extract the maximum power, and we really want to do all these tasks with inductor sharing and see which operational mode is the best. And we want to do it without compromising the performance, at very limited input power levels — 10 nanowatts to 1 microwatt — for the Internet of things.”