A Fresh Perspective on Autonomous Vehicles 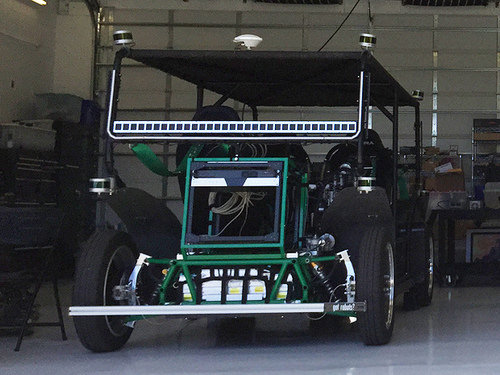 A startup company founded by someone with no related experience could change the auto industry forever. The company, called Zoox, is building an autonomous vehicle from scratch, and planning to put automated cabs on the road by 2020. This is a different approach from other autonomous vehicle players, such as Tesla, Google, or traditional auto manufacturers who have spent years modifying existing vehicles to make them autonomous. Perhaps the fresh perspective is because Zoox founder Tim Kentley-Klay is an industry outsider—his background is in media, but his radical ideas for autonomous vehicle design have already captured the interest of Google, who invited him to test their autonomous vehicle prototype. Kentley-Klay parterned with Jesse Levinson, an engineer who previously spent a decade working on self-driving cars. Zoox received funding from venture capitalists DFJ, a firm that has also invested in SpaceX, SolarCity, and Tesla.

Kentley-Klay doesn’t seem interested in selling autonomous cars to consumers. He doesn’t even like to call Zoox part of the auto industry. Instead, he envisions a new “mobility market” and his team is creating a taxi that would be a whole new class of transportation. He has compared today’s autonomous technology to the combustible engine’s role in the shift from horse and buggy to cars. The engineers at Zoox aren’t trying to make robotics work in traditional cars, they are designing an entirely new vehicle based on an autonomous system. The car would be what the NHTSA calls class four, a fully automated machine that only needs a human to tell it where to go. It is an electric car with no steering wheel, no brake pedal, and no windshields. There is no difference between the front and back, and it can drive equally well in either direction.

Since they started building a prototype in Melo Park, California, the company has officially “gone into stealth mode,” operating in virtual silence with minimal updates on social media and the Zoox website. They are aiming to finish prototype by end of next year, with a plan to debut final taxi in 2020. First they will have to face the same regulatory, testing, and manufacturing challenges as larger auto companies. It seems a bit far-fetched to imagine that a small company founded by an Australian animator will bring disruptive technology to the auto industry in the next five years. Then again, Kentley-Klay’s bold approach has already gotten financial backing and Google’s attention, so perhaps a creative entrepreneur is exactly the right person to change the way we travel.