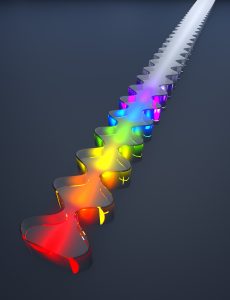 An artist’s embellishment of an image of the “gain medium” used to produce terahertz frequency combs. The different colors indicate that different wavelengths of oscillating terahertz radiation travel different distances through the medium, which has a different refractive index for each of them.

The new version uses a quantum cascade laser (QCL)—a tiny radiation source that enables the system to extract a material’s spectroscopic signature in just 100 microseconds. The device uses a frequency comb setup with a range of frequencies that are evenly spaced. It has a unique gain medium with regular, symmetrical indentations in its sides that alter the refractive index and uniformly emit the frequencies.