Department of Defense and Partners Invest $240 Million in Smart Fabrics 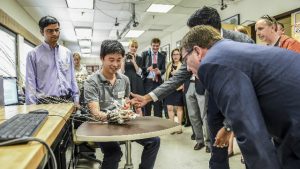 Defense Secretary Ash Carter, right, watches a robotics demonstration during a tour of a robotics lab at the University of Texas at Austin. The visit was part of a trip that also included a stop at MIT, and is part of the DoD effort to partner with the private sector and academia for technology research.

The United States Department of Defense (DoD) is partnering with a group of private companies and public research institutions to develop advanced smart fabrics. DoD is investing in a nonprofit group called Advanced Functional Fabrics of America (AFFA), which is a consortium that MIT organized to “accelerate widespread commercialization of highly functional fabrics.”

At an MIT event on April 1, 2016, Defense Secretary Ash Carter said that the DoD will contribute $75 million toward AFFA’s new manufacturing innovation institute. The project has also been backed by an additional $242 million from partners that include Nike, Goodyear, New Balance, Intel, and the state of Massachusetts. Carter said:

This is a pioneering field combining fibers and yarns with flexible integrated circuits, LEDs, solar cells, electronic sensors and other capabilities to create fabrics and cloths that can see, hear, sense, communicate, store energy, regulate temperature, monitor health, change color and much more.

Secretary Carter described several ways that the military could use smart fabrics. For example, parachutes made from fabric that is interwoven with lightweight sensors could catch tiny tears before they become dangerous enough to put paratroopers’ lives at risk. Uniforms with embedded electronics could detect chemical and radiological agents or automatically notifying medics about a soldier’s wound. Another possible application that Carter suggested is tents made from advanced fabrics that generate and store power to reduce fuel consumption in the field. He explained that investing in the innovation institute is part of the DoD’s overall goal to foster technology and innovation in order to support national security. Carter said:

These issues matter. They have to do with our protection and our security, and creating a world where our fellow citizens can go to school and live their lives, and dream their dreams, and one day give their children a better future.