3D Through-Wall Imaging with the Help of WiFi and Drones 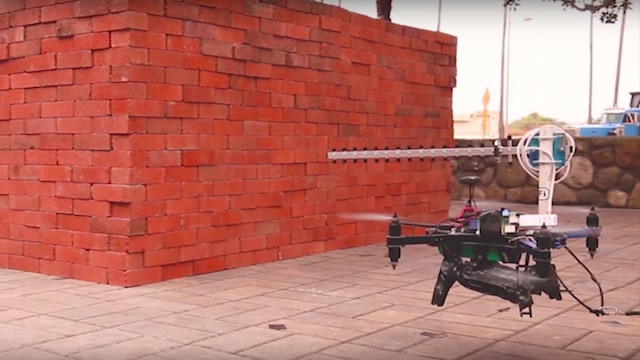 Scientists at the University of California Santa Barbara have designed drones that can see through walls in 3D using wifi signals. This invention has major military applications, and raises some serious questions about the nature of privacy.

To test their device, the scientists built a squat brick house with a smaller stone structure inside. Drones were then sent to scan the structure to determine what they could see. One drone sent a wifi signal, while the other received. The end result showed a structure fairly similar to the one inside the brick house. Not exact, but impressively close all things considered.

There were several interesting factors to this experiment that set it apart from previous research done in the same field. Firstly, the drones were entirely unmanned; the scientists believe that these types of devices are the future of technology and should be utilized as such. Secondly, the drones used only wifi signals to determine the objects being imaged. Finally, the drones id not need to have any prior knowledge of the area being scanned or the objects themselves. These are considerable advances in this technology; with further fine-tuning, scientists believe they can create even more detailed and exact images.

These experiments are not the first time the scientific team has worked on through-wall imaging with wifi signals, but it is the first time they’ve successfully implemented their ideas using 3D technology instead of traditional 2D imaging. While this has the potential for greater reward, it comes with a whole host of complications. While the drones were able to do an admirable job of imaging the interior of the structure, it was by no means a perfect result. Obviously more research and refining will be needed for these drones to be an effective tool.

But once the bugs are worked out, these drones could be a powerful device with multiple applications. Soldiers in the field would be able to scan the insides of buildings for potential dangers; law enforcement could use the drones to find survivors in dangerous areas. There are limitless possibilities for this technology. Now all that is left is to fine-tune the technology already available, and see where it takes us next.