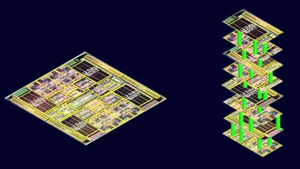 Carbon nanotubes solve many engineering challenges, and now a team from Stanford University has used them to make a computer chip that could be 1,000 faster than today’s chips. These tubular cylinders of carbon atoms have electrical properties similar to silicon, as well as unique mechanical, thermal, optical and chemical properties. The Stanford team used nanotubes to build a system that stacks memory and processing power into the same chip. Putting CPU and memory together reduces the time it takes for electrons to travel through conventional circuits, which translates to fast, efficient processing.

The researchers demonstrated their new design at a technology forum hosted by DARPA earlier this month. Typical flat electronic circuit cards have logic and memory chips as separate structures connected by wire, which can get jammed when the circuit gets overloaded exchanging data. The new stacked design, however, builds layers of logic and memory vertically. Data moves up and down on carbon nanotubes to connect logic and memory while avoiding the “traffic jams” that slow down conventional chips.

The new architecture could help manufacturers continue to produce faster chips, even if Moore’s Law eventually comes to an end. While Moore focused on transistors, this new approach from Stanford is all about increasing memory by putting the RAM and processors together.