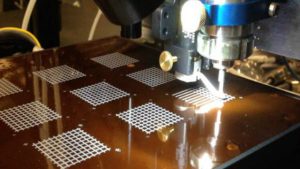 Researchers have developed a new ink that can be used to 3D print devices for radar systems. While 3D printing techniques have already been used to make everything from railguns to rocket engines, it is especially tricky to print tunable radar devices for generating or detecting radio waves. The challenge is that the materials for these electronic devices usually require high-temperature manufacturing, which would melt the plastic that is typically used for 3D printing. Now, a research team at  the Raytheon UMass-Lowell Research Institute have created a new ink that can be printed and cured at lower temperatures. The ability to 3D print radar systems on plastic would make them cheaper and more versatile. These new 3D printed radar devices could be used for military applications, weather monitoring, and self-driving cars.

The new ink is made of materials that have electrical properties that can be adjusted by applying voltage. To make the radar components, the researchers used one printer that dispenses the new ink through tiny vibrations, along with a separate aerosol-jet printer, which deposits conductive silver ink. They used the new ink to 3D print—for the first time—a type of capacitor called a voltage-variable capacitor, or varactor, which is used in military radar systems, automobile collision-avoidance systems, and cell towers. This electrical component was used to create a phase shifter for steering the beam of a phased-array radar system. The researchers also used the new ink to print a frequency-selective surface (FSS). The FSS is a filter that can block specific frequencies of electromagnetic radiation or allow them to pass through, which can be used for shielding.

The team at UMASS, Lowell, is now working on perfecting their devices so that 3D printed components can be integrated into conventional radar, with the ultimate goal of creating a radar system that is entirely 3D printed.