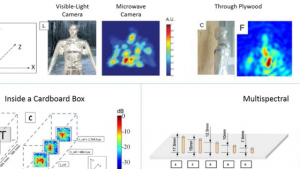 Researchers at MIT’s Media Lab have developed a camera that uses microwaves to capture 3D images, even through walls and fog. The camera could be especially useful for search and rescue missions and driverless vehicles, which have trouble navigating in foggy conditions. The new technology doesn’t rely on visible light and is less complicated and bulky than radar systems.

Unlike traditional cameras which use visible light, MIT’s new camera uses radio waves. The larger wavelength allows the camera to penetrate through objects, such as walls made of wood and sheetrock, which would block the view of a regular camera. Similar radar systems can also see through walls, but they are complicated and bulky because they are made of hundreds of thousands of sensors.

MIT’s new technology, on the other hand, takes a camera-like approach to microwave-imaging, which results in a simpler architecture, which is easier to produce and handle. The microwave camera focuses the electronics in a ten square inch space and uses a large passive reflector to focus the reflected energy to a small area. According to the researchers, their setup, “enables higher resolution radar imaging by covering a large aperture with a passive-element, and constraining all of the electronics to a small focal plane.”

The camera accomplishes the goal of producing 3D images through walls, but there is still plenty of room for improvement. Processing the image takes an hour, and then then system delivers low-resolution 3D images of most objects. (However, it can produce higher resolution images of electronics and mirrored surfaces.) At more than a meter wide, it is still too large for practical applications, but the researchers already have ideas for reducing the size by shrinking the transmission wavelength.