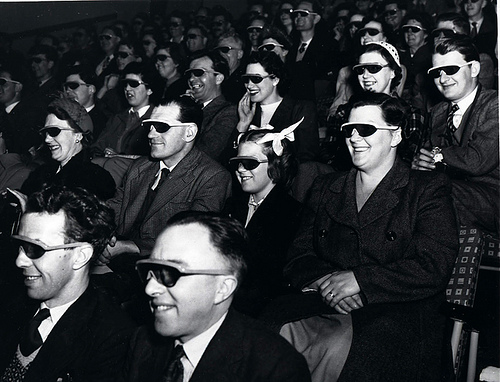 Future moviegoers could look much less goofy while watching the next big 3D flick. The latest developments in 3D display technology uses graphene to build pop-up holograms that could eventually be seen without needing special glasses. (And it’s about time—as you can see in the photo, not much has changed since the 50s!)

Graphene is an emerging material that could be game-changing for the electronics industry. It is a carbon material made of graphite, which is stronger than a diamond, incredibly conductive, and so thin that it is considered a two dimensional material.

A consortium of scientists from several international universities have recently used graphene to create a pixel that can bend light to produce a holographic image. In a paper that published in Nature Communications last week, they show that patterns of photo-reduced graphene oxide (rGO) that are directly written by laser beam can produce wide-angle and full color 3D images.

Dr Qin Li, one of the engineers involved in the project said, “Graphene offers unprecedented prospects for developing flat displaying systems based on the intensity imitation within screens.”  She continued, ““Other technologies are being developed in this area, but rGO looks by far the most promising and most practical, particularly for wearable devices. The prospects are quite thrilling.”