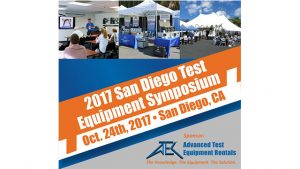 For the second year in a row, Advanced Test Equipment Rentals (ATEC) will host the San Diego Test Equipment Symposium (SDTES). This event has become known as the premiere showcase for test equipment that spans a variety of industries, providing attendees and exhibitors a chance to network, experience demos, and join expert panels.

On Tuesday, October 24th, attendees and presenters from San Diego and beyond will gather at the ATEC campus to learn about the latest equipment innovations in aerospace, defense, government, medical, energy, material science, electrical, EMC, and other industries. Attendees come to get a first glimpse at new technology, and have the rare opportunity to network face-to-face with the very manufacturers who design and build the equipment they use daily. Exhibitors will be able to demo new products and connect with a targeted market of niche, highly engaged prospects.

“We were pleased with the turnout and quality of demos at our inaugural event, and are eager to showcase what’s in store this year,” said Richard Russo, marketing manager at ATEC. Though it’s not for another couple of months, the 2017 SDTES has already generated buzz amongst the diverse test equipment industries. “We’ve already had prominent manufacturers sign up as exhibitors to demo some of their latest equipment. There’s still time for other vendors to sign up to present, but I’d suggest they do it soon, before spots fill up.”