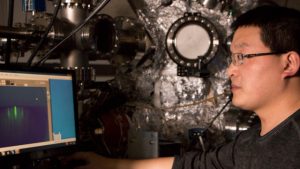 A team of researchers led by MIT postdoc Cui-Zu Chang has achieved the first zero-resistance edge state in a circuit. Superconductors have also achieved zero resistance, but they are not spin-polarized, so they can only transfer electrical information, but not spin information. Chang’s innovation exhibits the quantum anomalous Hall effect, a property that allows it to transfer information.

This breakthrough was achieved using extremely thin materials called topological insulators (TIs). These materials allow electrons to flow freely, but only on their surface. In 2013, while Chang was a doctoral student at Tsinghua University in China, he was part of a research group that first demonstrated the Hall Effect with electrons flowing only along the edge of a TI film circuit. While that system was impressive, it wasn’t quite perfect yet, because it still exhibited slight electrical resistance. Since then, Chang has improved the system while working with colleagues from MIT and several other universities. Now, his team’s circuit exhibits zero resistance to current flowing along what he calls a “very special edge channel.” Chang says, “The bulk is insulating but the chiral edge channel is metallic and spin polarized, so it’s very useful for the next generation electronics and spintronics with low power consumption.”

Unfortunately, Chang’s circuit shares a drawback with superconductors: zero resistance can only be realized at very low temperatures. But it could be possible, so it’s worth pushing forward with the research. He says, “There are indications that [temperatures] can be raised.” If a quantum anomalous Hall State circuit can be realized at higher temperatures, it could become the basis for quantum electronics. Information could be transferred over very long distances with minimal heating and a dissipationless current flow.