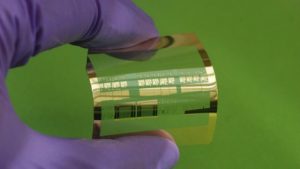 Engineers at the University of Wisconson—Madison have found an inexpensive, easy way to make flexible transistors. The manufacturing method can easily be repeated and scaled up, but the most exciting development is the transistor itself. It is faster than any other silicon-based flexible transistor, and it is capable of wirelessly transferring data or power. The transistor operates at a record 38 gigahertz, and the researchers estimate that it could even operate as fast as 110 gigahertz, which would give computers incredibly fast processing speeds. The transistor’s record-setting performance is because of a unique, three-dimensional current-flow pattern that makes it consume less energy and operate more efficiently.

To build it, the researchers used nanoimprint lithography, combined with a technique that is called “selective doping,” where researchers introduce impurities into materials in precise locations to change their electrical conductivity. Except in this case, they weren’t “selective” – instead, they doped the entire single crystalline silicon. They added a light-sensitive material, used electron-beam lithography to create a mold of tiny patterns on the material, and then applied the mold to a flexible silicon membrane to create a pattern. Finally, they used a nanoscale knife to cut precise trenches in the silicon and added wide gates that function as switches on top of the trenches. Zhenqiang (Jack) Ma led the project. He said:

Nanoimprint lithography addresses future applications for flexible electronics. We don’t want to make them the way the semiconductor industry does now. Our step, which is most critical for roll-to-roll printing, is ready.

The tiny knife allows the researchers to cut narrower trenches than traditional techniques, so it could help semiconductor manufacturers fit more transistors onto electronic devices. The method could be used for roll-to-roll processing which would allow manufacturers to fabricate many of these speedy transistors on a roll of flexible plastic. Ma and his colleagues described their research in the journal Scientific Reports.