A new lithium-metal battery technology that will provide two times the energy density of traditional lithium-ion batteries is just months away from actualization.

The new lithium metal (li-metal) battery is designed using an ultra-thin metal layer of lithium and copper rather than traditional materials like graphite or carbon. This thin li-metal foil is 1/5th the thickness (of current battery technology) making it nearly “anode-free”, and has capacity for 10x as many ions. The li-metal foil is layered with the cathode and then coated with a proprietary dual-layer electrolyte consisting of a solid polymer and a novel quasi-ionic liquid electrolyte. This process prevents the formation of mossy lithium dendrites (a source of known short circuits – a major fire safety concern).  Other modifications were also made to the separator and cell designs. With this, the team was able to produce a battery that is significantly thinner, lighter, and with a greater energy density than the best lithium-ion battery technology.

The team behind the materials of this new technology is SolidEnergy Systems, a Boston-based startup and MIT spinoff, founded in 2012. Their “near anode-free” li-metal battery materials have been in development for some time. Late last year, the group further demonstrated the success of these innovative materials with a prototype smart phone battery, earning the support of numerous investors. 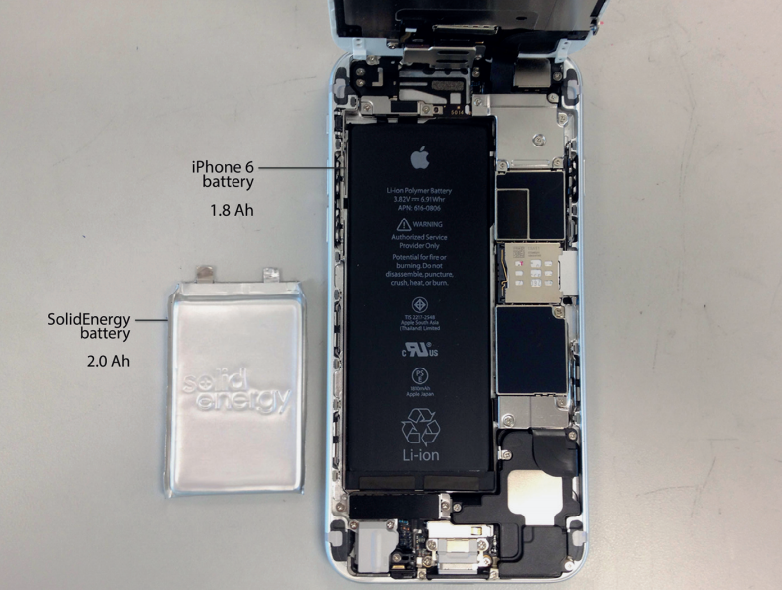 With the tremendous support received, SolidEnergy energy regained momentum towards plans of commercialization and upgraded their facilities this past June by relocating from 3,000 square feet in Waltham, Massachusetts to 23,000 square feet in Auburn, Massachusetts. The BBC provided special coverage of the facility that aired in February of 2015, you can view the special here.

The team is now preparing for the first stage of commercialization of their li-metal battery technology this coming November. The plan is to begin supplying materials to smaller markets first and scale up to larger markets. This first market scheduled to boast the use of this new technology will be drones, followed by watches and wearables, smart phones in 2017, and electric vehicles in 2018.

Learn more about their work: http://www.nature.com/nature/outlook/batteries/pdf/batteries.pdf