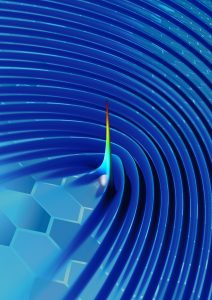 By using plasmons to “wiggle” a free electron in a sheet of graphene, researchers have developed a new method for generating X-rays. In this image of one of their simulations, the color and height represent the intensity of radiation (with blue the lowest intensity and red the highest), at a moment in time just after an electron (grey sphere) moving close to the surface generates a pulse.

A new technique for generating X-rays could produce a tight, narrow beam, which would help reduce the amount of radiation patients receive. X-ray technology is long overdue for an upgrade, since it has hardly changed during the last century. The standard approach to X-rays involves creating high-energy charged particles and “wiggling” them. Researchers from the Massachusetts Institute of Technology (MIT) and the Singapore Institute of Manufacturing Technology have developed a new concept that could be less expensive and more precise.

The idea is that by striking a graphene sheet with a laser beam, surface waves called plasmons would be generated. An MIT news release explains, “These plasmons in turn could be triggered to generate a sharp pulse of radiation, tuned to wavelengths anywhere from infrared light to X-rays.” While traditional methods involve accelerating electrons, this new technique could be easier and less expensive because it only requires low-energy electrons. The result would be a tight, uniform X-ray beam.

This approach is described in the journal Nature Photonics. At this point, the new X-ray system is only theoretical, based on simulations. Looking ahead, the team is building a device to test the concept in a lab. The researchers say a practical X-ray device could be ready in a soon as three years, but they also cautiously warned that it may never work in the real world.