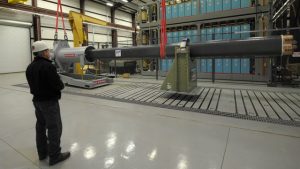 The  U.S. Navy was planning to test an electromagnetic railgun at sea later this year, but officials are considering postponing or skipping the demonstration in order to speed up the project. The test, which is planned to be based out of the Eglin Air Force Base in Florida, would involve using a prototype of the futuristic weapon to hit a floating barge in the ocean. However, Navy officials are now considering skipping the prototype, and instead placing an operational railgun aboard a destroyer that would go into service in 2018. Matt Leonard, spokesman for Naval Sea Systems Command, told Scout Warrior:

The Navy is studying the pros/cons of forgoing a 2016 at-sea demonstration of the Railgun system, with an eye toward potential opportunities for accelerating testing of Railgun and the associated hypervelocity projectile.  Discussions are ongoing.

The Navy has been exploring railgun technology for several years, because it has the potential to be an effective, inexpensive weapon. Instead of using explosives, a railgun uses electromagnetic current to fire a kinectic energy projectile at targets. It would have a long range and be able to fire projectiles at Mach 7 speeds, which is three times faster than most existing weapons.

“The Navy is determined to increase the offensive punch of the surface warships,” Loren Thompson, a defense analyst at the Lexington Institute, told the Associated Press. “To do that with a limited budget, it needs to look at everything from smart munitions to railguns to lasers.”