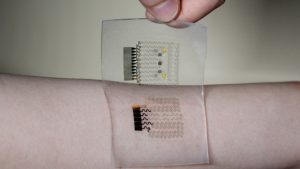 Managing diabetes could soon be as easy and painless as wearing a band aid. Researchers at Seoul National University (SNU) have developed a wearable patch that monitors glucose levels and delivers the correct amount of medicine accordingly. This is a big step toward the ultimate goal: a noninvasive medical treatment that automatically manages glucose levels for diabetics. It’s not surprising that—like so many of today’s most exciting inventions—the patch is made from the “wonder material” graphene.

The stretchy patch consists of a heater, temperature, humidity, glucose and pH sensors; as well as tiny needles that deliver medicine. Although graphene has many outstanding abilities, it hasn’t yet been used in many medical applications because it exhibits low electrochemical properties. To get past this limitation, SNU researcher Dae’Hyeong Kim boosted graphene with gold, which gave it the electrochemical abilities that the patch needed.

With this enhancement, the patch is able to measure glucose levels in sweat. If it finds that a patient’s sugar levels are imbalanced, heat-triggered microneedles will then release the appropriate amount of metformin (the most popular prescription for type 2 diabetes). So far it has only been tested in mice, but with further development, this graphene-based patch could be an easy, painless, and accurate way to manage diabetes, a disease that affects millions of people worldwide.