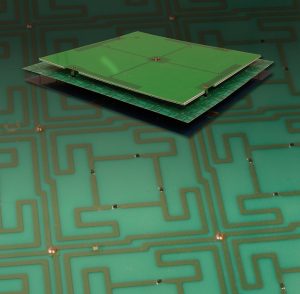 Penn State engineers have used a tunable, lightweight metamaterial to build an antenna system that could improve satellite communications. Previously, metamaterials and small antennas have both been considered to be limited by their narrow operating bandwidths. However, the researchers found that by tuning a metamaterial and an antenna in tandem, they were able to create a small antenna that can operate at lower frequencies. To make it work, they used modern digital radios.

Clinton Scarborough, an engineer who worked on the project, explained, “Radios need to be able to operate over a significant bandwidth, but typically only on a single channel at a time. The laws of physics dictate that a small metamaterial antenna will have a small bandwidth, but modern radios can easily tune the antenna so that it operates on whatever channel the radio is currently using, giving comparable performance to a large broadband antenna while taking up less space and even providing new capabilities.”

Typically, the lower the frequency, the bigger the antenna must be. So researchers have struggled to find a way to design low-frequency metamaterial antenna systems that are small enough to be practical. The Penn State team’s new method could lead to smaller, light weight, multifunctional miniature antennas in the future. “By employing our functionalized metamaterial concepts, we have been able to devise a way to dynamically tune the frequency response and polarization for the antenna, while, at the same time, providing a pathway to scaling the designs to low frequencies,” said researcher Douglas H. Werner. The research is described in Advanced Electronic Materials.